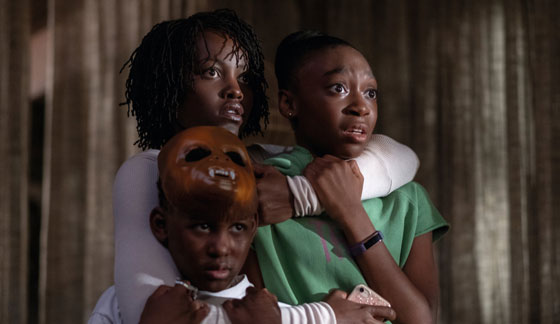 It used to be that, when I thought of Jordan Peele, I thought of his character, Raffi, the baseball player who used to over congratulate his teammates by yelling “Slap Ass!” and whacking them on the backside.  Then he won an Oscar.  Which means when I sat down to watch Peele’s newest creation, “Us,” my expectations had been raised.  And, wow, was I not disappointed.  In this reviewer’s humble opinion, Peele has created a new horror masterpiece.

1986.  A time of movies on VHS tapes and Hands Across America (which I actually participated in).  It’s a beautiful night on the boardwalk as little Adelaide Wilson (Madison Curry) and her parents take a stroll.  Her mother excuses herself, reminding her husband to watch the little girl.  He doesn’t and the little girl wanders down to the beach, where she enters a house of mirrors.

Not the best place to lose yourself.

There is so much I want to tell you about this film, but to do so would spoil one hell of a night at the movies.  Like his Oscar-winning debut film, “Get Out,” Peele has found a way to combine drama, humor and horror in such a perfect way that I found myself, literally, on the edge of my seat during the screening.  I haven’t done that since I was 16 and snuck into a re-issue of “The Exorcist.”

To even go into slight detail about the performances would be a major spoiler so I will just say that, like “Get Out,” Peele has assembled an amazing cast with much to do and many ways to do it.  Peele’s direction is fluid, keeping the story moving at an almost breakneck pace.  During the end credits he thanks many of the filmmakers he admires, including Steven Spielberg, whose work obviously influenced some of the shots in the film.  And, if I could, I’d give the film an extra star for dressing one of the characters in a JAWS shirt!

Don’t walk, run to the theatre to see “Us.”  And be prepared to run some more!