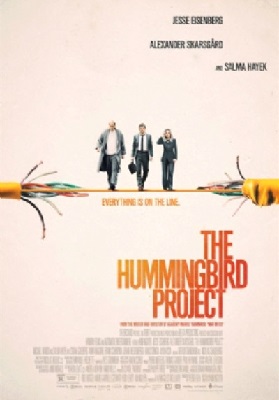 There’s a great scene towards the beginning of “Something About Mary” which features Ben Stiller and Harlan Williams talking about William’s idea for a video entitled “7 Minute Abs.”  Stiller shoots down his idea by commenting that someone may try to better him with a video entitled “6 Minute Abs.”  The new film “The Hummingbird Project” offers the equivalent of “5 Minute Abs!”

Vincent Zeleski (an excellent Eisenberg) and his cousin, Anton (an equally good Skarsgard) are employees at a high tech communications firm, writing code and making the boss rich.  But they have come up with an idea.  One that will make them rich beyond their wildest dreams.  And all they have to do is dig a tunnel from Kansas to New Jersey.

A well written (by director Nguyen) and directed thriller, the film introduces us to the Zeleski cousins as they begin to hatch their scheme.  Their plan is to build an underground optical fiber system that can intercept stock buying and selling transactions on their way to New Jersey, allowing them to get their orders in first and profit off of their information.  Their goal is to have a signal that reaches the Garden State from the exchange in Kansas in less than 16 milliseconds.  17 is too slow.

It is so nice to see Eisenberg in a role that he can inhabit.  While I thought he was OK as Lex Luthor in the recent “Justice League” themed films, it’s been a long time since I’ve seen the “The Social Network” Eisenberg, one who deservedly earned an Oscar nomination for Best Actor.  Here he is the idea man…the fast talker who won’t take “no” for an answer.  As cousin Anton, Skarsgard is an odd bird with a good heart and a great mind.  He’s the kind of person who will tell you “it’s a secret” than draws up a hand-written non-disclosure form for you to sign because he just explained the entire project to you.  As the boss who feels hurt by her employee’s betrayal, Hayek is, as always, beautiful and firm.  And it’s so nice to see “Breaking Bad” star Michael Mando (Nacho) in a good role playing a genuinely good person.