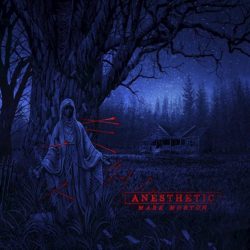 “Anesthetic” is the debut solo offering from Lamb of God Guitarist Mark Morton. The album which features 10 tracks from Morton and a who’s who list of top rock and metal musicians is being released via WPP/Spinefarm Records and while the album certainly has plenty of heavy moments it also shines the light on other aspects of the Grammy Nominated guitarist playing which listeners will surely enjoy.

From full on in your face metal to hip-hop tinged southern rock and all points in between the soft spoken guitarist Mark Morton appears to hold nothing back on his debut release. Pulling from a list of top players including Mike Inez of Alice in Chains, Ray Luzier of Korn and Dave Ellefson of Megadeth “Anesthetic” takes listeners on a stylistic roller coaster ride deserving of multiple listens. The album opens with the track “Cross Off” featuring deceased Linkin Park front man Chester Bennington on vocals. Easily one of the heavier tracks on the record the song explodes like a shotgun blast setting the stage for what is to come. “Axis” the third track on the record taps into Morton’s love of hip-hop as its repetitive beat lays the foundation for a raspy vocal performance courtesy of Screaming Trees front-man Mark Lanegan while Morton showcases a slew of southern rock like riffs that would make Lynyrd Skynyrd very proud. “Anesthetic” is not just all heavy guitar riffs and double bass drums fills as the song “Reveal” gives listens something quite different from the albums other 9 tracks. Featuring Brooklyn based guitarist/vocalist Naeemah Maddox “Reveal” is a multi-layered blues/rock track complete with Stevie Ray Vaughn like solo acting as the icing on the cake.

Fans of Mark Morton or any of the other guests who appear on “Anesthetic” will definatley want to give this record a listen.  The albums solid performances and top notch production make for a great listening experience that can be enjoyed time and time again as the albums diverse textures and styles will appeal to a wide variety of listeners.

7.) Back From The Dead (Featuring Josh Todd)