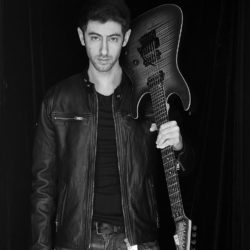 Steve Dadaian is an Armenian-American fusion guitarist based in the Tri-State NY,NJ,PA area. Steve’s latest album “Follow the Light” is a theatrical, symphonic soundscape packed full of razor-sharp guitar work that will leave listeners slack-jawed. Media Mikes had the chance to speak with Steve fresh off his appearance at this year’s Winter NAMM convention where we discussed the albums creation, his work System of a Down’s Serj Tankian and Soilwork’s Bjorn Strid.

Adam Lawton: What was it that first got you started with music?

Steve Dadaian: I grew up in New Jersey and where I went to school they made you take a mandatory guitar class. That was really my first exposure to the instrument. I listened to a lot of classic rock artists like Jimi Hendrix and Randy Rhoads. Listening to music like that you get drawn to the guitar and as I got older I started listening to more progressive stuff like Rush and Dream Theater. Listening to all those bands helped me build my technique and was the foundation for where my playing is today.

AL: Your new album “Follow the Light” is a shift from your previous work. Can you tell us about that progression?

SD: With this record aside from one song there really aren’t any vocals. In order to fill that space I had to think about how I was going to write each piece and what I wanted to use on each track. With symphonic music there are so many different ways you can go. This was a lot of fun because I could use different chord structures and voicing’s that a traditional vocalist might not be able to do. As a guitar player I was really able to open up which I enjoyed.

AL: Where did you start when writing these pieces?

SD: That’s something I struggle with quite a bit. Sometimes I will come up with a melody other times it will be just a riff. For the title track of the album I started with the opening riff and then everything came after that. Generally the symphonic stuff comes last. The guitar is my base line as that is what I do. The chords, leads and riffs are the bulk of the song so once I have those I will go back and fill in the space to help each section sound more epic. Aside from that my process always seems to vary.

AL: Did you provide all the instrumentation on the album or did you work with other musicians?

SD: On three of the tracks I collaborated with other artists. I worked with Claudio Pietronik from Italy who does a lot of stuff for Jam Track Central. He is a great player with a lot of knowledge about cinematic music. We were able to collaborate on two tracks and another we co-wrote. For the most part the instrumentation all comes from me. I do love working with other artists but when you have a technical riff it can be hard to add things in order to make it sound bigger. I have a good sense of where I want things to be so for a majority of the album it’s just me.

AL: The track “Soul Connection” has a great back story behind it. Can you tell us about that?

SD: That was the only song on the album with vocals. I like to hear a track with vocals from time to time so I included “Soul Connection”. This was a song I originally wrote for a writing competition put on by Serj Tankian from System of a Down. This song meant a lot to me and I actually ended up being a finalist in the competition. I wanted to do more with the track and the chance to work with Bjorn Strid from Soilwork presented itself. I had told him the story of the song and it resonated with him the same way it had with me so I sent it to him and about three days later it came back perfect. Bjorn gave a brilliant performance. What’s really cool is the first seven notes of the song are the ones Serj came up with through what I submitted to the contest. I feel this song is a pivotal point in the concept record. One other thing that is really great about this song is that all proceeds from it are being donated to the Creative Armenia Foundation. They are an initiative to help fund artists world-wide who might not have resources available to them. They work with musicians, film makers and of other artistic formats. It’s a great cause that I am glad to help out with.

AL: Are there any plans in place to tour in support of the release?

SD: I just came back from a performance at NAMM which was really great. I currently have some guitar clinics lined up around the Tri-State area for this year and I have also been talking with some New York City venues about putting on a few different things. As the demand increases we will certainly look at expanding things. I just had a request to perform in Miami so there are quite a few things that are being put together