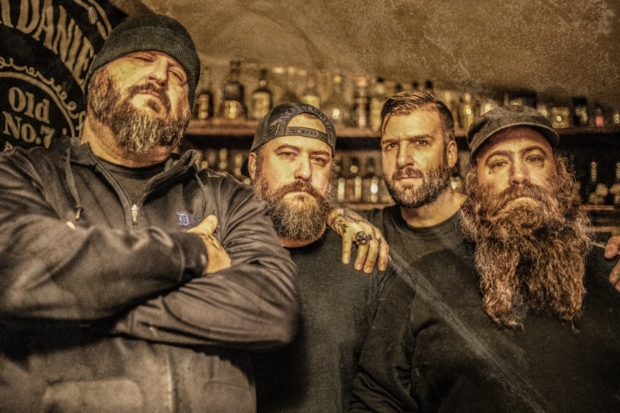 Mike Valente is the guitarist for the Upstate New York hardcore/metal band Brick By Brick. The band is set to release a new album titled “Hive Mentality” on February 22nd and Media Mikes had the chance to talk with Mike recently about the release, working with “Orange is the New Black “star Jessica Pimentel and the bands upcoming European tour.

Adam Lawton: Can you give us some background on your band Brick By Brick?

Mike Valente: The band has been around since 2004 and at that time we had confined ourselves to be just a local band. We had a couple members that couldn’t do a lot of traveling so it was basically something we did just for fun. As the band progressed and there was a bit of a demand for us we had to look at getting some new members who could commit more time. In 2014 we added Ray Mazzola on vocals and since that time things have been a lot of fun.

AL: What can you tell us about the band’s new album “Hive Mentality”?

MV: The last record we put out really didn’t have the distribution reach that we had wanted. In order to make up for that we went back in and re-worked a bunch of things and finished up some other material that we hadn’t done before. We are now working with Upstate Records and they have been really good to us. At the time we were slated to be part of the Rebellion Tour in Europe and we needed a new record so we went into the studio so this time when we were touring over there people had a better idea of who we were and could get our record. Getting picked up for this tour in March is what really kicked things into motion.

AL: There a few different guests on the record. Can you tell us about those?

MV: Tony Foresta from Municipal Waste/Iron Reagan has been a friend of mine for a long time. When those guys come through we always have a great time. I had been listening to a lot of thrash music at the time of writing the song and Ray and I though Tony would be perfect for the song as it has a real party vibe to it. The experiences we have had together match perfectly so I called Tony up and he didn’t even bat an eye as he was totally down for it. The song we “In The Ruins” which features Vincent Bennett of The Acacia Strain was a song we had originally released on a split with the band Ruckus from California about six or seven years ago. The original version was with our old singer and there was a limited amount pressed. Everyone was down for it so that worked out nicely. We also have Jessica Pimentel from Alekhine’s Gun. A lot of people know her from “Orange is the New Black”. I have known her for quite some time as well and thought she would be perfect for the rant part in “Hive Mentality”. Just like with the others I called her up and she was more than happy to do it.

AL: How did the cover of Motorheads “Iron Fist” end up on the album?

MV: We had been asked to be part of a Motorhead compilation that Upstate Records was putting together called “Damage Cases”. We had intended on doing a more obscure song but when we looked at the track listing a lot of other bands were looking to do the same thing. I couldn’t believe no one had picked “Ace of Spades” or “Iron Fist” being they are such iconic Motorhead songs. We chose “Iron Fist” as it’s such a fun song to play. We did our own spin on it and it’s just a great song to play live.

AL: Can you tell us more about the bands European tour in March and about any other shows you have lined up?

MV: We kick things off with our release party show on February 22nd. We are doing that at Upstate Concert Hall in Clifton Park, NY. Anyone who buys a presale ticket will also get a copy of the album. We are doing a bunch of other cool packages for that show as well. The line includes Dying Fetus, Ramallah, I Am, Assault on the Living, Snap Mare and Close to Nothing. After that we aren’t doing anything until we leave for Europe March 6-18. I think this is the eight year that they have done the Rebellion tour/festival over there. We will be playing with Madball, Iron Reagan and bunch of other great bands. That tour is going to be a lot fun and we are defiantly looking forward to it.

For more info on Brick By Brick you can visit their Facebook page at www.facebook.com/brickbybrickny and on Instagram at @brickbybrickhc