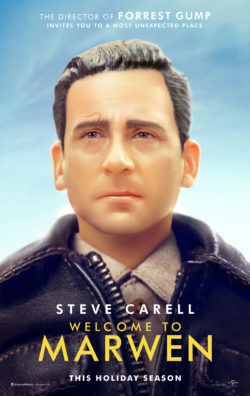 Back in 2015, director Robert Zemeckis brought the story of Philippe Petit to life in “The Walk.” It was a visually stunning film with a gripping story that was accompanied by a sore reminder at the core of its story, the Twin Towers in New York City. It was an awe inspiring flick that was equally joyful and tragic. That kind of nuance has been lost from Zemeckis’ touch in 2018 with his latest film, “Welcome to Marwen.”

I mention “The Walk” because it came seven years after the gripping documentary, “Man on Wire,” which many would agree is the better story of Petit. This time around, Zemeckis is crafting another story in the shadow of a documentary. Back in 2010, “Marwencol” brought the world the story of Mark Hogancamp, a man who finds solace and comfort in dolls and a miniature city he built outside his residence after a vicious attack that robbed him of thousands of precious memories from his previous life. It’s a humbling and breathtaking story that has been robbed of its magic in “Welcome to Marwen.”

Steve Carell does bring that humble nature and PTSD terror to Hogancamp’s story, but it comes up short once Zemeckis’ starts monkeying with the mechanics. About a third of the film is told through the eyes of the dolls that Hogancamp craft’s, as well as their surroundings. These scenes are a little jarring, as they come to life to fill in a plot point, or in Hogancamp’s mind, during a restless night of sleep. These scenes feel out of sorts with the film because they pop-up like a jump scare or are inadequately shoehorned in alongside real-life events.

While it’s a creative concept, with the dolls literally coming to life and talking to Hogancamp or playing out parallels in his life, they muddy the storytelling waters. Zemeckis’ attempt to be clever, end up diluting the various themes of Hogancamp’s story, one that is about recovery, acceptance and the mental struggles that victims of vicious attacks go through. Also undercutting these serious subjects is misplaced humor that disjoints the overall narrative.

Moments that should move you emotionally fall short because of how tonally misshaped “Welcome to Marwen” is. The doll sequences become overbearing, stretching out the story, with several aimless subplots and awkward moments that come off unintentionally funny as opposed to sympathetic. I can’t complete dislike something that comes from a good place, but it’s understandable if someone walks out of this movie confused or bothered by its half-hearted attempts at compassion.