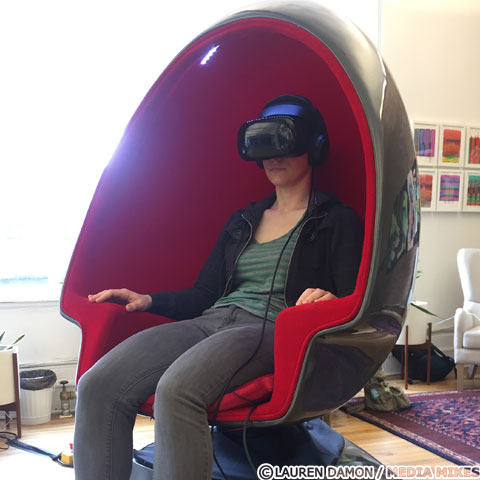 It’s safe to say I will try anything when it comes to new theatrical experiences. I’ve always loved Lincoln Square’s IMAX screenings, I’ve seen entire Broadway plays done in binaural audio (that’s “3D” sound) and even shelled out extra ticket money to see a favorite film in 4DX once or twice. So I was excited to try out Positron’s Voyager Chair, a VR experience which is being deployed to several theater celebrating the release of Universal’s First Man. Guests heading out to several AMC locations across the nation have not only the chance to just see the Damian Chazelle film, which is released on October 12th, but to take a small excursion to the moon themselves.

I got to try out the Voyager chair on Tuesday both with the First Man VR experience as well as a seasonally-appropriate horror short called “Night Night” and was really impressed with the level of immersion, from the spatial audio to truly being able to look in all directions within my headset. My First Man mission even had an animated co-pilot! Best of all, the Voyager chair itself, whose design looks straight out of Men In Black, was actually pretty comfortable and even after these two shorts I felt no sort of motion sickness, which I was wary of considering 3D films can give me a headache. 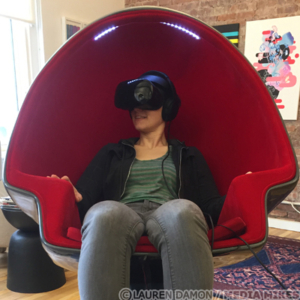 Positron’s CEO Jeffrey Travis was in New York this week with the Voyager to talk about the potential that this technology presents to cinematic VR experiences.

Lauren Damon: Was this pod created just for First Man?

Jeffrey Travis: No, we created this to be a platform for cinematic VR in general. So the first kind of wider public experience was we did The Mummy with Universal. So we’ve done three experiences with Universal–The Mummy, Jurassic World and First Man. It was all really cool. But there’s a lot of other studios and places that we use these with. The idea is to create ultimately VR cinemas.

LD: Is the goal here to get whole theaters of these?

JT: Yeah! So we can do theaters with this. Mini ones of twos or threes and we actually set that up here at Pod hotels here in Brooklyn. It’s open to the public. We have pairs of chairs at AMC theaters here in New York at Lincoln Square, San Francisco, DC, LA, but eventually we’re going to be putting this in permanent installations and creating VR theaters of 30-40 chairs and people could buy a ticket and come for an experience that’s either like something of what you’ve just experienced or longer. Somewhere from a half hour to an hour.

LD: Yeah because how long can you view it without feeling it too much?

JT: Yeah we talk about that. I think the ideal length is about half an hour for cinematic VR. I think longer than that, the headsets can get a little heavy on some people. But those are being made by companies like Facebook and Samsung and Microsoft and HP and they’re getting better all the time. So I think we will be able to have 90 minute VR experiences. But right now a half hour feels like a very full meal.

LD: What would the price point be in terms of ticketing?

JT: So probably around—it depends on experience—but probably averaging around $30.

LD: That price is actually similar to they have those “4D[x]” theaters here, what are your thoughts on those?

JT: We do get asked about that. I think it’s still fundamentally different. You know, to me the 4D movie theater, you’re adding some sensory effects that compliment the 2D screen experience. Which is fine and good, but what we’re trying to do here is really bring VR to where you forget about the screen, you even forget about the motion…So it’s almost like you don’t notice it’s happening. You should just feel like you’re actually in the story. That’s kind of the goal, not just a little enhancement but something that’s integrated.

LD: How much testing goes into something like this? How much time does it take to produce?

JT: It really depends on the piece but it goes through a lot of testing. Several months. This next piece that we’re working on is called “Shady Friend,” a VR comedy starring Weird Al Yankovic. It’s a psychedelic comedy that uses scent as well and it’s about a guy that accidentally takes this latest designer drug and goes on this crazy LSD trip. So we’re using motion, haptics and scent and it’s in post-production right now, we shot in July, and it will probably be ready by January. About six months.

LD: When did you start working on this particular First Man experience?

JT: First Man, so that was produced by Ryot and CreateVR and they started actually just two months ago. It was a very accelerated schedule. Which is a little more unusual. 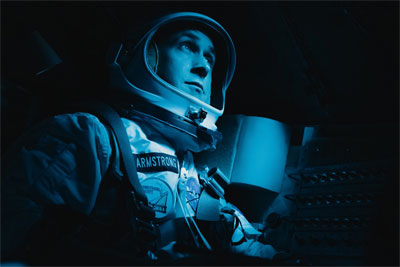 LD: Was all that footage created for this VR?

JT: So obviously the stuff you’re seeing in Mission Control and on the screens is from the film, but then everything else for the VR experience had to be created from scratch. The films assets are mostly 2D and we needed to create these 3D volumetric environments like the moon.

LD: Are you going to get Ryan Gosling to try this out?

JT: I hope so! We had them at the premiere of First Man in the space there. So he was there, I didn’t get a word whether he did it or not. I know the producers of First Man got in there.

LD: There’s definitely a push to add more to theaters considering how much is available for home streaming, do you see this as adding to that?

JT: That’s the idea. I think that movies are certainly in the US and North America, struggling with people going to the box office because they’d often rather stay at home and stream on Netflix. So I think part if the appeal for this is that hey, this is an experience you really can’t get at home. At least not yet. And this brings people out to the movies or at least out to our locations and experiences.

LD: What other films will be having similar tie-in experiences like this?

JT: I mean there’s some coming we can’t really talk about, because they’re not really announced yet. But we’re working working with several other studios besides Universal on some titles and we’ll be announcing as we can.