Jaycee Clark is the vocalist for the Winston-Salem NC based rock band A Light Divided. The band is set to release a brand new album on October 5th titled “Choose Your Own Adventure”. Media Mikes had the chance to speak with Jaycee recently about the band, their new album and their latest single/video “Fear of Heights”.

Adam Lawton: Can you give us some history on A Light Divided and how the band came together?

Jaycee Clark: About ten years ago I started the band with our drummer Adam Smith and a few other people who are no longer in the band. Adam and I have always had our eye on the prize and after a few years we found some other guys who had the same passion we have and who are willing to do whatever it takes to get the band to the next level. Staying out on the road and all that can be a lot to ask somebody so having a group of guys who are down for that just as much as I am is really awesome.

AL: The new album comes out Oct. 5. Can you give us some background on that?

JC: We have worked with producer Kile Odell on all of our releases. When we went in to start work on “Choose Your Own Adventure” things were a little bit different as we had some new members this time around. Things were much more collaborative between the five of us and it wasn’t just one person writing music and another writing lyrics. Everybody had their own say and influences reflected in the process which was great. Ultimately I think this record came out better because of all that. We bounced a lot of ideas off one another and if everyone thought it was cool we went with it. At the end of the day everyone was super stoked with what we had done.

AL: Aside from the collaboration aspect of this album was there anything else that happened differently this time around during the writing/recording process?

JC: I think this record is a lot different than our previous works. Prior to 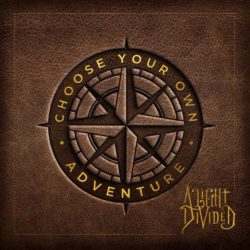 starting work on the record we were sort of feeling boxed in as to what A Light Divided was supposed to sound like. We decided to throw all of that out the window so that we could have a fresh start. We really took our time making something that all of us could be proud of.

AL: Can you tell us about the album’s title “Choose Your Own Adventure”?

JC: There was a little bit of nostalgia we wanted to capture from the book series we grew up reading. With those books you had decisions to make which resulted in different outcomes. I liked that sentiment and related it to real life. For me “Choose Your Own Adventure” means to not be afraid to just take life by the balls and go after the things that make you happy. Every song on this record is about making a choice from removing negative people in your life to stop fighting your inner self. We really took the ideas behind the book series and applied it to real life.

AL: You recently released a video for the song “Fear of Heights”. Can you tell us about that?

JC: It was really important for us to showcase our live performance and who we are as a band. We are very high energy basically all of the time. We love getting on stage and showing the emotion behind each of the songs. We also feel if we are not having fun on stage how will anyone else have fun? We wanted to showcase the type of band we are visually right off the bat. “Fear of Heights” is such an upbeat song that it was a no brainer for us to pick that song as our first single. It is a very guitar driven song with a super catchy chorus. The song gives me a very summer type vibe that makes me think of going to the beach and blasting songs with the windows down. “Fear of Heights” is perfect for that!

AL: Are there plans in place for the band to tour behind the albums release?

JC: We are going to be doing a south east run called the “Chapter 1” tour (laughs). We are very excited about this new album and want to hit the ground running once it is released. This first run is going to be just us headlining the shows as we felt it was important for us to go out alone to show who we are and then let things grow from there. This tour is going to be a game changer for us as before when we toured we could only go out for about ten days or so before we had to get back. With this upcoming run we are going to be out a bit longer and most of us will probably lose our jobs (laughs). We are choosing our own adventure on this run and it is do or die so we are going out there to really do this.

For more info on A Light Divided you can find them on facebook.com/alightdivided and check out the video for “A Fear of Heights” here.