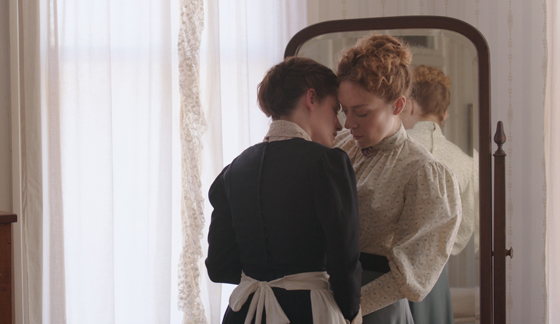 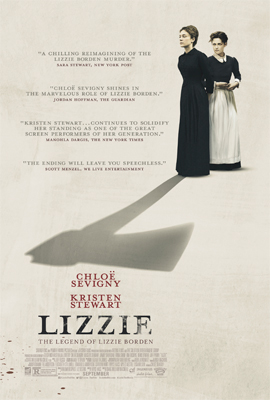 In many ways, this is the perfect time of year to release Lizzie. As we enter the fall, the movie theaters turn to smaller dramas while basic cable crams its schedules with true crime and hauntings in the run up to Halloween. The axe murders of Abby and Andrew Borden have always figured heavily into the latter. So much so, it occurred to me while watching Craig William Macneill’s carefully crafted depiction of Lizzie Borden that I had never seen a version of this story that wasn’t hyper campy. A quick search on Youtube turns up ample “dramatic re-enactments” and even a Dance Moms routine. Perhaps anticipating that audience, director Macneill serves up Abby’s body mere moments into his film before rewinding back at the investigator’s prompt to Lizzie, “Did your father have any enemies?” Did he ever. What follows is a drama that simmers with tension between its small cast led commandingly by Chloë Sevigny and Kristen Stewart.

In 1892, Lizzie shares a modest Massachusetts house with her father Andrew (Jamey Sheridan), stepmother Abby (Fiona Shaw) and sister Emma (Kim Dickens). Lizzie is old for being unmarried and her community—but her father most of all—isn’t shy about treating her as a pariah. Lizzie having a seizure (or “spell” if you’re old timey) in public only adds fuel to the case for sheltering her. Into their home comes an Irish maid, Bridget Sullivan (Stewart), who Lizzie forms a connection with. Before you can say steamy pizza rolls, they are passing notes and rendezvousing in the family shed.

As far as I can tell, the theory for Lizzie’s sexuality being a part of this case, aside from her never marrying, comes from a later in life “crush” on an actress of the time. Whether or not you buy into this particular take really isn’t the concern of this film which draws strength from the bond between Sevigny and Stewart. When Andrew turns predatory towards Bridget, Lizzie’s anger towards him is stoked as is her motivation to sabotage his affairs. Affairs which include compromising Lizzie’s inheritance. Likewise when Lizzie’s uncle (a snarling Denis O’hare, always a welcome addition) tries to intimidate her, Bridget makes her presence known and he sees himself out. Though their society is rigidly patriarchal, under this roof the men are outnumbered and Macneill makes great use of the confined space to reinforce that. The soundtrack remains sparse, giving dominance instead to the ambient sounds of the household. The creaking wood of the stairs and bedrooms might as well be a character unto itself, and gives the whole piece an extra level of claustrophobia. It works really well for this story which is essentially a slowly escalating war between father and daughter.

As we march on through the final acts, the story does slow down with some time jumps between the murders and the aftermath. It’s as though to let us see how an obviously guilty (in this telling of it anyway) Lizzie might sell her innocence to investigators when really that could have wrapped up more strongly with their credible—if still sensational— take on this infamous case.