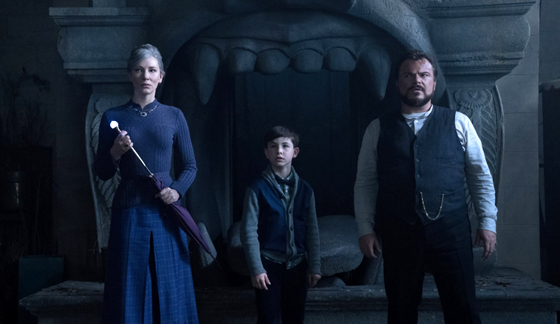 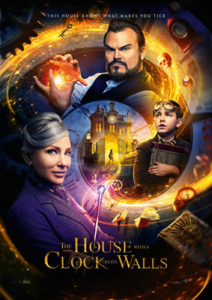 Did Eli Roth finally direct a decent movie? I kid. But I do wonder how much of his childhood is on screen. I begrudgingly wonder if what makes “The House with a Clock in its Walls” work has a little something to do with the crass director of “Cabin Fever” and “Green Inferno.” However, I’m more likely to praise Black’s infectious energy, Blanchett’s subdued charisma, and the writer of the hit TV show “Supernatural,” Eric Kripke. S

The movie does a fine job establishing Lewis (Vaccaro) and the crummy situation he’s been put in. The 10-year-old boy has uprooted his life after the death of both of his parents. He moves into his uncle’s otherworldly home in New Zebedee, Michigan. Uncle Jonathan (Black) hasn’t connected or talked to his nephew in years, if at all. The unlikely duo are often visited by Jonathan’s lifelong friend and neighbor, Florence (Blanchett). Lewis is an astute lad, and quickly picks up on the fact that Jonathan and Florence aren’t all they seem; Jonathan is a warlock and Florence is a witch (a good one).

I walked into “The House with a Clock in its Walls” having the most basic understanding of what I was in for. I read the book it’s based on in elementary school. The memory of it is so hazy, I can’t quite remember what grade it was or even the nuts and bolts of the book. I do remember our teacher used it as an excuse to bake the cookies that are frequently seen throughout the story. Even with just the faintest of knowledge of what Jonathan and Florence were all about, I still found myself caught up in the film’s gothic tapestry and wizarding hijinks.

Jonathan’s home is a character in and of itself. The stain glass windows change frequently to drop messages or hints to characters in the home, the furniture and lawn decorations act like household pets, eerie clocks and sinister dolls are spread across the home like jump-scare landmines, and there’s an ominous noise at night that sounds like a doomsday clocking chiming to an unfortunate inevitability. The humans inside the house are delightfully quirky as well.

The film builds a lot of momentum, but constantly shoots itself in the foot with juvenile humor, that I can only hope wasn’t in the book it’s based on. Urine, vomit, and poop are not off limits for this film, which is unfortunate because the film itself displays a bit of intelligence that’s sure to put a smile on the faces of adults and kids alike. It really doesn’t need to cheapen itself by undermining its own wit. The film also mishandles the tone of the final act, which involves blood magic, demons and the apocalypse.

The film stays afloat thanks to its delightfully creepy scenery, that’s constantly being chewed on by Black and Blanchett. This is the kind of film that could be cherished by younger audiences for generations, and honestly if it sends a few kids to a library in search of the book, that’s always a bonus. The calendar says September, but “The House with a Clock in its Walls” brings Halloween early for those with a spooky bone in their body.