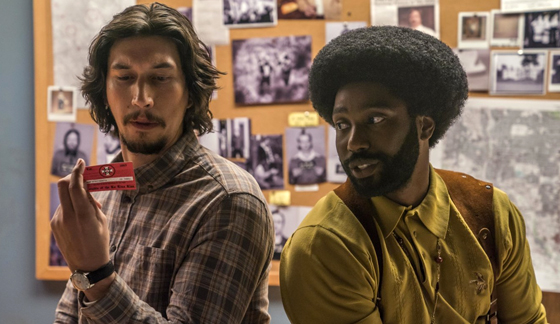 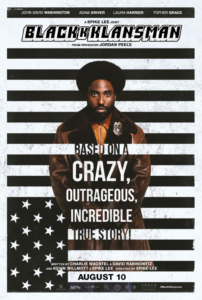 Spike Lee and I go way back.

The movie theatre I managed in Baltimore was in an urban area.  I proudly showed “She’s Gotta Have It” and “School Daze.”  I was (and still am) angry that “Do the Right Thing” wasn’t nominated for a Best Picture Academy Award and I was thrilled to meet him and speak for a few minutes in Washington D.C. while he very graciously signed my “Malcolm X” script.  I should also mention that I silently cursed him when he shot a reel of his film “Crooklyn” in the widescreen format but intentionally didn’t adjust it, giving the film a look that caused many customer complaints and passes given out.  He’s made more good movies than bad and this week he’s here with one of his best.

It’s the 1970s.  Ron Stallworth (Washington) is a black police officer in a time where, if you’re the first one on the scene of a crime, your fellow officers may think YOU are the perp.    One day, while reading the newspaper, Ron comes across an ad for the local chapter of the KKK.  As a joke, he sends in for his membership card and is delighted to get it.  When Ron is invited to meet the membership, he agrees, sending fellow officer Flip Zimmerman (Driver) in his place.  Zimmerman is Jewish and has to learn to keep his emotions to himself when surrounded by the idiot gang he finds himself a part of.  As Ron/Flip get deeper into the group, they soon find themselves chatting up David Duke, then the first Grand Wizard of the KKK, today pretty much a punchline.  When Duke is scheduled to come to Ron’s town, things go from comical to serious as the groups true goals are announced.

Powerful and pertinent, “Blackkklansman” is a film that deals with both the past and the present.  Director Lee and co-writers Kevin Willmott, Charlie Wachtel and David Rabinowitz have created a world that anyone over 21 will recognize.  There is humor but then there is horror.  Not violent horror, but the horror at the spoken word.  Can people truly be this vile?  Sadly, yes.

As with many of Lee’s films, a great cast has been assembled.  I was surprised to learn that leading man Washington is the son of Denzel.  If this performance is any indication, Pop better keep an eye on the rear view mirror.  He plays Stallworth with the dignity required, something that wasn’t easy to display in the early 1970s.  Driver is equally good here.  This is the first thing I’ve seen him in since the last two “Star Wars” films and – SPOILER ALERT – though as a filmgoer I will never forgive him for killing Han Solo, I will continue to recognize him as an actor to watch.  As David Duke, Grace is pitch perfect.  He doesn’t scream out his hatred, like his dimwit followers.  He oozes it, like the politician he would later become.

“Blackkklansman” took home the Grand Jury Prize at this year’s Cannes Film Festival and I look for it to be a front runner when the Oscar nominations roll around.  Do you hear that, Academy?  I don’t won’t to get angry again!