Thrash legends Slayer made a stop at the scenic Toyota Pavilion high atop Montage Mountain in Scranton, PA on July 31st as part of their 2018 final world tour. Now in its second leg the tour lineup features newly added Napalm Death and returning favorites Testament, Anthrax and Lamb of God giving fans plenty of metal music for their money.

Opening up the night was the veteran UK thrash band Napalm Death, having just joined the tour replacing Behemoth the band certainly had some very large shoes to fill. Vocalist Mark “Barney” Greenway 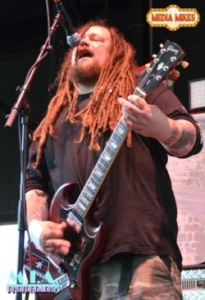 hit the stage shaking and convulsing like a mad man as the four piece band from Meriden, West Midlands, England tore through songs such as “Suffer the Children”, “Scum” and “Dead” before closing out their early set with a cover of the Dead Kennedys song “Nazi Punks Fuck Off”. When an opening act exudes the amount of energy and furry that Napalm Death does you know right away that you’re going to be in for a very intense evening. The Bay Area’s very own Testament would take the stage next helmed by legendary vocalist Chuck Billy who sounded great as he belted out songs like “Brotherhood of the Snake” and “D.N.R. (Do Not Resuscitate)” which had the ever growing Scranton crowd frothing at the mouth only before being hit between the eyes with the formidable “Into the Pit” and “Over the Wall” which closed out the bands set. Each member of the group put on solid performances with a tip of the hat going to guitarist Alex Skolnick and drummer Gene Hoglan.

Anthrax would take the stage next with their signature New York sound and attitude that put on the map back in the 1980’s bassist Frankie Bello jump, ran and writhed like a demon spit from hell as the band performed tracks like “Caught In A Mosh”, “Madhouse” and the 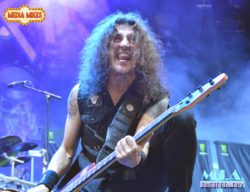 anthemic “Anti Social” which had the PA crowd on their feet and singing at the top of their lungs when cued by front man Joey Belladonna which certainly heightened the evenings intensity. After a quick set change Lamb of God would take the stage next flanked by their signature black and white single star flag side scrims. From the first note all system were go as the band chugged and thumped through songs like “Walk With Me in Hell”, “512” and “Laid to Rest” before closing out with the track “Redneck” from the bands “Sacrament” album. The band wasted little time between each song and really let the music do all the talking for which the crowd seemed to enjoy. Drummer Art Cruz did an amicable job filling in for Chris Adler who announced in late July that he would be sitting out this leg of the tour due to unforeseen circumstances. Though Cruz performed well was in fact handpicked by Adler there was just something different about the band without the veteran member.

Finally the clock struck 9:20pm and it was Slayers turn to take the stage for the final time at Montage Mountain. The stage which was now hidden behind a giant black curtain started to come alive with fire and smoke as the band found their places and the opening of “Delusions of Saviour” blasted through the speakers giving away to the curtain dropping and the band launching into the break neck paced “Repentless”, Vocalist/bassist Tom Araya sounded and looked great sporting a much slimmer look than when I last had the chance to see the group perform. Both guitarists Kerry King and Gary Holt were on their game this evening showcasing their precision on amazing performances of “Mandatory Suicide”, “Black Magic” and “Seasons in the Abyss” before closing out the night with the always formidable “South of Heaven”, “Raining Blood” and “Angel of Death” which serves as a homage to fallen guitarist Jeff Hanneman.

If you have never seen Slayer live I strongly urge you to do so now! The band will remain in the States through August before taking some time off prior to a full overseas tour. The band has stated this will be their last US tour so your time to see them is limited. If that alone doesn’t get you out to one of the few remaining shows then consider the stellar line up they bring with them as just one or two of these groups would make for a great night of head banging. Instead you get a total of 5 bands in all! Each of the groups on this bill give it their all from beginning to end and if you don’t end the night with either ringing ears or a sore neck then you clearly did something wrong.