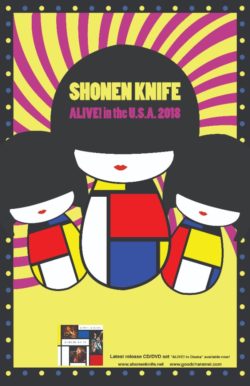 SHONEN KNIFE Are ALIVE! IN THE U.S.A
Full US Tour Begins August 28

Bringing with them the candy-coated conductivity of unforgettable melodies, the incandescence of inestimable headbanging, the buoyancy of a brilliant display, and the potency of pure punk rock – SHONEN KNIFE are ALIVE! In The USA.

Boasting a nearly 40 year career, these three luminaries of rock & roll have wielded fun and food-centered bops that earned them the love and respect of music goliaths like Nirvana and Sonic Youth. They’ve made their way from their home of Osaka, Japan to the United States many times, but this year they’re putting their personal affection for each and every city on display. Following the release of their tenacious live DVD/CD ALIVE! In Osaka (Released on Robby Takac of THE GOO GOO DOLLS’ Good Charamel Records), Shonen Knife have prepared to deliver that same hometown energy from Buffalo on August 28th to Brooklyn on August 31st, Chicago on September 9th, Los Angeles on October 5th, and so much more. Each city will have its own personalized and limited edition artwork available at the show, because for Shonen Knife, home is where the fans are.

Shonen Knife frontwoman Naoko comments, “Our first live album Live in Osaka was released in 2006, and was recorded at the same venue as this new one. After the first live album, we toured, released music constantly, grew as a band and improved. This year we would like to bring the fever from ALIVE! in Osaka on our US tour. Not only will we play songs from the record, but we are also preparing special rarely played songs from earlier albums to the present. Let’s have a fun time together!”

The DVD/CD ALIVE! In Osaka was recorded live at Juso Fandango in Osaka, Japan in December of 2017 and includes 21 tracks from the band’s nearly four decade long career as Japan’s most loved indie-rock import.

Frontwoman, Naoko, explained, “It is our first live album after 12 years. The drummer was changed from the last time. You can try to compare the new one with the last one. It might be interesting. The show was held in our hometown and of course everybody there was so excited. I hope you can get happy, fun and cheerful with this album.”

Featuring classics such as “Twist Barbie”, “Bear Up Bison” and “Sushi Bar Song”, newer tracks like “Jump Into The New World” and “Rock N Roll Tee Shirt” as well as a cover of Nick Lowe’s classic “Cruel to be Kind”, the band is captured in their true element, entertaining fans in the city that made them who they are today.

With incendiary and icon-building appearances on Lollapalooza, MTV’s 120 Minutes, Beavis & Butthead, Cartoon Network’s The Powerpuff Girls, as well as a well-received tribute to The Carpenters where they covered “Top of the World”, Shonen Knife have secured their rock solid cult status as they march into the future.

ALIVE! In Osaka is available as a limited edition CD/DVD set and digitally in audio and video formats for streaming and download. 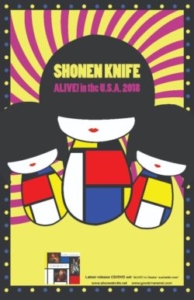