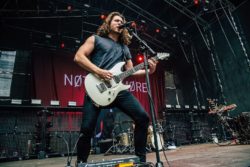 Mark Vollelunga is the guitarist for the Texas based rock band Nothing More. The group’s latest single “Just Say When” (which is a bit of a departure from the bands heavier style) recently rose to number 16 on the Billboard Charts for main stream rock songs. Media Mikes had the chance to speak with Mark recently about the release, the bands current tour with Five Finger Death Punch and the bands plans for the remainder of 2018.

Adam Lawton: Can you give us some background on the band’s latest single “Just Say When”?

Mark Vollelunga: Personally I am really stoked and happy with how the song is doing. It is a bit of a different color for us. It’s nice to have something that is a little more bare bones and that is all about the lyrics and melody. The song really came about after having toured so much on our self titled release. Touring takes a strain on your personal life and it had started to cause some division for Johnny and myself. What I poured into the song was the idea of co-existing. Sometimes you use that spark or connection which can cause a point of staleness. It can be sad when you just co-exist with the love of your life. Not to be a complete dreamer and say that is completely realistic as we all go through dry spells. This song hits at that pinnacle point when you are not sure whether to hold on or let go.

AL: Was this song actually created while you were out on the road or was put together after you were back home and in the studio?

MV: It started when we were still on the road. I was listening to a lot more folk jam songs at the time and I came up with this start of the start and showed it to Johnny. We clicked on it right away and started putting melody to it pretty quickly. After that the song sat for awhile until we were jamming together one day. After that we finished it to the point of what you almost here now. When we were done we weren’t sure if the song really fit with the rest of what we had put together and it almost didn’t make the record. The song emotionally fit but sonically we just didn’t know if it was in the same vein. At the eleventh hour we thought it would be cool and different to include it and I am so glad we did.

AL: Being that this track was much different from your other material did you approach the initial writing process any differently?

MV: Writing for me is different every time. If I have a guitar part or lyric thing happening or Johnny has a wacky programming idea or interesting spiritual thought it all just depends. Other times it comes out us all sitting and jamming together. We try not to limit ourselves in any way. I think if you go through the same process every time things can get stale. Even though we are approaching the same thing we try to come at it from different angles in hopes of inspiring something neat and unique.

AL: At what point was the decision made to release this song as a single?

MV: Generally you try and go with a more emotional song on your second or third single. This song really appealed to everyone and the feedback we got from people was great. I think a lot of people have been at the point that the song talks about and they can relate to it.

AL: There is also a video for the song as well. Can you tell us a little about that?

MV: We got to do something different once again with this as well so it’s been another great experience. My wife recently got me interested in to contemporary/lyrical dance. She loves a lot of the dance shows which are on television right now. At first I thought they were kind of cheesy and I didn’t really get them but the more I watched them I learned to appreciate them. What I like is when the choreography matches with the emotion and mood of the song. That’s kind of what we tried to do with “Just Say When”. We some professional dancers come in and we made this great piece which is sort of out of our genre but we try to tie everything in through our lyrics. The others guys may have been a bit skeptical at first but after showing them some pieces that moved me and were very compelling they became interested in the whole thing.

AL: Can you tell us about the tour that the band is currently apart of?

MV: We are coming off of doing three festival shows with a bunch of different 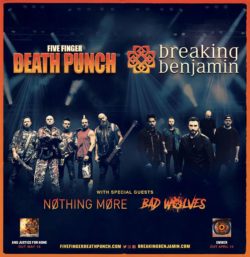 bands. We got to play with Stone Temple Pilots headlining one and Incubus headlining another. I hadn’t seen Stone Temple Pilots with their new singer yet and being able to do that was really cool. It was a trip down memory lane for sure. Currently we are out on the road with Breaking Benjamin and Five Finger Death Punch. We have toured with both of these groups before and they are seasoned bands that have a lot of wise words they can pass on to us. We definitely try to be sponges when it comes to stuff like that. We will be going all over the United States from now until September. After that we will be doing this great self help festival that A Day to Remember puts on in Detroit. After that we go back to Europe for a run with Of Mice and Men and Bullet For My Valentine. To end the year we will be touring Canada with Three Days Grace. All these tours are going to a lot of fun.

AL: What is it like being able to play with such a diverse group of bands on all these different tours?

MV: It’s awesome! I love that we can cater to our audience. If you are a metal fan, a rock fan or just an alternative pop person I feel there is a lot in our music that touches on all of those genres and it can be appreciated. At the end of the day a good song is a good song. I feel our society puts too much importance on the style of songs and where it needs to be lumped into. If you think about bands like The Beatles and Led Zeppelin who had so many different genres of music within their own sound I am proud that we can do that as well.

AL: Was it difficult for you starting out being that you were trying to be very diverse?

MV: Absolutely! It was difficult. In 2011 I think we had our first label interest. We did some showcases and I remember hearing back from one label on my birthday that we weren’t left of center enough. We were just too much in the middle of the road for some people. To us it’s always been if the song is good then that’s what we go with. It has been hard to gain belief and understanding at times from the music industry because of that. Put us in front of any crowd though and we will win people over.

For more info on Nothing More visit www.nothingmore.net