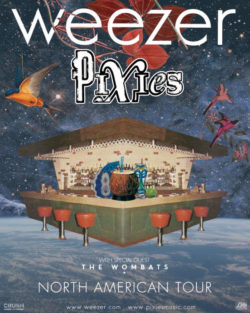 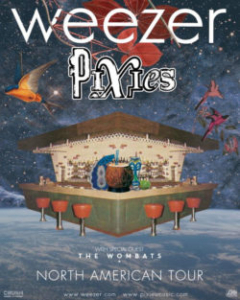 Nerd rockers Weezer made a stop at the sprawling St. Josephs Health Amphitheater at Lakeview in Syracuse, NY on July 15 as part of the bands current North American tour with alt favorites Pixies. Also performing on the bill this evening were UK natives The Wombats. All three acts brought the near capacity crowd to their feet time and time again making for an energetically charged night by the lake.

The Wombats would take to the stage first performing a handful of songs of their recently released album “Beautiful People Will Ruin Your Life”. Though the band took little time to introduce themselves the 3 piece band from Liverpool, UK allowed the music to speak for them providing for a great start to the evening’s festivities. After a quick set change the Black Francis led Pixies would rumble to the stage where over the next 60 plus minutes they took the growing Syracuse crowd to musical school. The full length set was made up of a variety of tracks from the bands 6 albums and included such favorites as “Um Chagga Lagga”, “Wave of Mutilation” and “Gouge Away” before closing out the night with one of their more commercial tracks “Where Is My Mind?” and the shred-tastic “Vamos”. The band showcased a unique cohesiveness that only comes from having performed together for over thirty years making the set just a little more special. After an extensive set change and to the tune of the “Happy Days” intro the evening’s Co-headliner, Weezer was finally posed to take the stage. The bands set was a bombastic mix of hit after hit which was combined with corresponding stage set ups which paid homage to the bands history. Highlights of the night included songs like “Buddy Holly”, “Undone (the Sweater Song)” and acoustic versions of “Island in the Sun” and the A-Ha classic “Take On Me” all of which were performed solo by front-man River Cuomo atop a small moving boat that circled the rear of the amphitheater.

From open to close all the band on the bill brought their A games as each provided both a great listing and visual experience. With the Pixies and Weezer both performing full length sets you get practically two full scale rock shows for the price of one! What could be better than that? With the tour running through late August there are still plenty of chances to catch the band so, do not miss it!