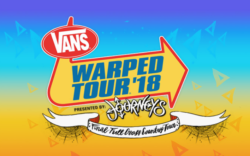 The long running Vans Warped Tour made its final appearance at the Darien Lake Performing Arts Center on July 25th providing long-time attendees just one last opportunity to enjoy a day of fun in the sun while listening to a wide range of music acts. Though the day kicked off under foreboding skies it certainly didn’t stop eager fans from rushing through the gates in an effort to get one of the festival six stages which were spread strategically throughout the sprawling outdoor venue.

One of the last if not only traveling festivals in the United States announced earlier this year that after twenty plus summers 2018 would be the final run of the Vans Warped tour. The festival which began in 1995 served as the summer 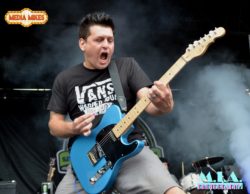 highlight for many alternative music fans like myself and even though this year’s line-up on paper wasn’t as stellar as years past there still was a little something for every era of warped tour fan. Right away you could tell that the day was going to be unique as the diverse crowds ranging from hoards of middle/high schooler’s to entire families and all ages in between were present and ready to take in the music. Highlights of the day included and earlier afternoon set by longtime Warped tour performers Less Than Jake whose set was full of fun upbeat moments which included water cannons and toilet paper blowers. Guitarist Chris Demakes even took time to thank the Buffalo crowd for all their support of the band and the tour going back to the days when the event was held in Le Salle Park. Other notable performances included a ten song set from Buffalo’s favorite sons Every Time I Die. The 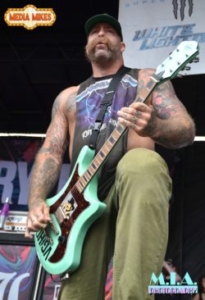 group which took the stage flanked by family and friends blistered the crowd with a high intensity, aggressive set which came to a close with guitarist Jordan Buckley crowd surfing on a cabinet top while playing the final notes of the bands closing song. As the day started to wind down I took in sets by crowd favorites Simple Plan who played a brief greatest hits set which was a lot of fun and included a bevy of black and white beach balls which was only fitting given the occasion. Shortly after we checked out sets by the Massachusetts based Four Years Strong, metal-core legends Unearth and the face painted duo of Jamie Madrox and Monoxide collectively known as Twiztid. There set was a nice break from the crunching guitars and thunderous double bass kicks as those were replaced by thumping bass beats and tongue and cheek lyrics which were quite comical. Before calling it a day we checked out the always energetic and entertaining Nekrogoblikon. The group performed a couple of songs of their most recent release “Welcome to Bonkers” before breaking in to their back catalog which consisted of “No One Gets Out Alive” and “Powercore”. The groups green skinned mascot John Goblikon made several appearances both on stage and off as he helped the band and fans get the most out of the shred-tastic thirty minute set.

As the sun started to set on the final Buffalo stop of the Vans Warped tour it made me think back to the previously attended years and the fun that was had. Often sun burned, sweaty and always with ringing ears memories from seeing bands like NOFX, Bad Religion and Rancid in the tours early years to more recent tours with bands like Masked Intruder, Of Mice and Men and Teenage Bottle Rocket. The Vans Warped tour really was the place to be during the summer and this one was no different and, while the tour may come to a close for the final time on August 5th in West Palm Beach, FL myself and thousands of other attendees will always have the memories that the Vans Warped tour set the stage for. So long Warped tour and thanks for the memories.