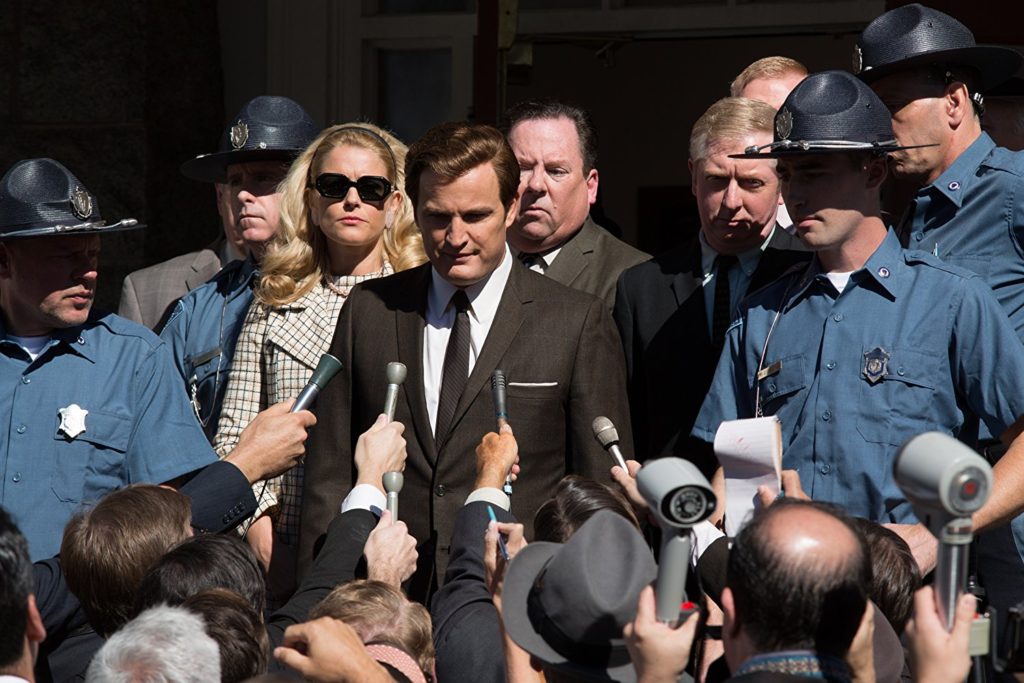 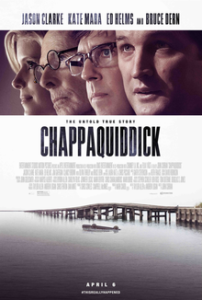 Before I begin I’m going to share something.  I was born in 1960 and the Kennedy family were royalty in our house.  One of the few times I can remember my father crying was the day JFK was assassinated and I can remember my mother doing the same thing in 1968 when Bobby was killed.  My first presidential election was 1980 and I worked tirelessly for Ted Kennedy’s campaign.  So I kind of go into anything related to the Kennedy legend with a very wary eye.  I’m so glad that “Chappaquiddick” did not disappoint.

July 18, 1969.  While the world waits as Apollo 11 heads towards the moon, the mood is festive on Chappaquiddick Island, a spur of Martha’s Vineyard in Massachusetts.  It’s a reunion of sorts for the Boiler Room Girls, a dedicated group of young women that campaigned long and hard for Robert Kennedy in 1968.  Joining the women are several members of RFK’s campaign staff, including his younger brother, Ted (Clarke).  As the film’s opening montage tells us, the Kennedy boys, from oldest brother Joe – a Navy pilot who died in World War II, John – our 35th President and Bobby, who died before he could accomplish the great deeds he set out to do, had all died young, leaving Ted to carry the family mantle.  It is something he is reluctant to do, but he is also contemplating running for President in 1972.

Also at the party is pretty Mary Joe Kopechne (Kate Mara), one of Bobby’s strongest supporters.  She and Ted talk for a while and then the two leave the party, get into Ted’s car, and drive away.  Hours later, Ted will return alone and on foot.  He will tell those who greet him “I’m not going to be President.”

A solid film that keeps you guessing on the facts, “Chappaquiddick” is an unbiased attempt to tell the story everyone thinks they know.  The story is helped along by solid direction and a cast that embodies more than imitates the characters.  Clarke does a fine job as Kennedy, nailing the mannerisms and accent perfectly.  As Kennedy cousin (and family fixer) Joseph Gargan (from the Fitzgerald side of the family) Ed Helms gives a fine dramatic performance.  Also so nice to see Jim Gaffigan, who was so great in “Chuck,” continue his journey to dramatic actor as family friend Paul Markham.  And Bruce Dern, in a role that’s almost wordless, is still stern and tough as family patriarch Joseph Kennedy.

As an added bonus, if you’re a fan of the film “Jaws” – and if you’ve ever read my stuff you know it’s my favorite film – you’ll get to see a lot of Edgartown exactly as it appears in the film.  Even the real life area doctor, Robert Nevin, who played the town doctor in the film, rates a mention.

Finally, and this is just a mention, but I’ve been to Chappaquiddick and I’ve driven over the Dike Bridge.  Sober.  In broad daylight.  It’s still pretty narrow if you ask me.  If you don’t believe me, give it a look yourself.  And while you’re there, stop and pay your respects at the grave of Pipit, the dog from “Jaws.”

A solid film that keeps you guessing on the facts, “Chappaquiddick” is an unbiased attempt to tell the story everyone thinks they know.  The story is helped along by solid direction and a cast that embodies more than imitates the characters.