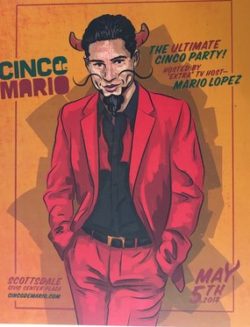 Mario Lopez expands his brand across the US, one weekend at a time.

LOS ANGELES (April 5, 2018) – As the Cinco de Mayo countdown begins, Entrepreneur, Emmy® Award-winning host of nationally syndicated “Extra” and the nationally syndicated iHeartMedia radio show “On with Mario Lopez”, will bring a new kind of fiesta, “Cinco de Mario” to a city near you.  Cinco de Mario will feature authentic Mexican food and drinks, margaritas, micheladas, craft beers and more.  Lopez is known for his fun-filled, contagious energy and it’s no secret that he loves his Mexican heritage.

Lopez has partnered with Rick Phillips of RND events to launch Cinco de Mario nationwide. “Rick is the best in the business and I know with Rick, these events will be stellar,” says Lopez.

Rick’s Arizona Taco Festival was the ﬁrst taco festival ever organized. Today, the event has grown into a two-day spectacle with over 40,000 people attending, and over 60 restaurants competing.  It also includes a wildly popular tequila expo that’s viewed by tequila companies as a premier collection of 100 top brands. Out of the gate, this was the most successful inaugural event ever produced in Scottsdale, AZ. “People love a fiesta and Mario knows how to party.”  Said Rick.

Lopez loves his heritage and continues to seek out authentic products to bring to the market place.  Most recently he joined forces with Oscar de La Hoya to bring Casa Mexico Tequila to the forefront.  Cinco de Mario represents the best Lopez has to offer.  “I’m all about working hard and playing hard.  If you know me, you know that good food, drinks, music, friends and family are what I have always been about.  I’m just bringing them together in one spectacular traveling event.”

Starting in Scottsdale, where the Lopez-branded event debuts, Cinco de Mario will take Lopez’s team and his brand nationwide, stopping at select cities along the way.  Lopez adds, “We plan on expanding the brand across the nation, in places from Los Angeles, California to various cities throughout Ohio, Texas, Florida and more to start.  Now is the perfect time to showcase the positivity and glory of Mexican heritage throughout the U.S. and the world.”

Come get your feast on!  Cinco De Mario will have culinary offerings that range from food trucks to resort chefs dishing out tacos, tamales, and other gourmet Mexican fare.  Other features include an authentic Mexican Mercado, fabulous Mexican bands, Mariachi, Ceviche Bars and more. 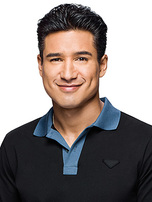 Mario Lopez continues as host of “Extra,” the Emmy® Award-winning entertainment news program, for the show’s 24th season. This will be Lopez’s tenth consecutive season as the show’s host, after co-hosting “Extra’s” weekend edition since January 2007.

A man of many trades, Mario Lopez has the overwhelming desire to always keep active. Mario is the two-time Emmy-winning host of “Extra” a nationally syndicated daily entertainment show. Concurrently, Lopez is the host of the nationwide iHeartMedia radio shows “On with Mario Lopez” and “iHeartRadio Countdown with Mario Lopez.” Lopez has also launched a YouTube channel called “The Lopez Family.” Created alongside Awestruck, the channel features his wife Courtney, their two children, and their two dogs. He can currently be seen as the host of the new CBS live-action game show “Candy Crush,” based on the popular mobile game.

Not only does Lopez have a proclivity for the entertainment industry, he is also an avid sports fan. He has taken his love of sports, specifically boxing, to the next level as a host of the iHeartRadio podcast “The 3 Knockdown Rule,” which is also featured on the FOX Sports Radio website.

In September 2014, Lopez released his first autobiography, “Just Between Us.” In his memoir, Lopez shares his successes and disappointments, never before-told stories and family values. Lopez became a New York Times best-selling author with his healthy eating guide “Extra Lean.” In May 2011, he released the follow-up to “Extra Lean,” entitled “Extra Lean Family.” This new book featured recipes and tips beneficial to the entire family. Additionally, Lopez penned “Mario Lopez’s Knockout Fitness,” a best-selling fitness book that offers readers a look into his impressive workout regime; “Mud Tacos,” a vibrant children’s book he co-authored with his sister Marissa; and “Mario & Baby Gia,” a children’s book he wrote for his daughter Gia. “Mario & Baby Gia” is currently being developed into an animated series.

No stranger to rigorous routines, Lopez danced his way to the finals in the third season of ABC’s hit show “Dancing with the Stars.” Shortly after, in summer 2009, Lopez successfully completed his first run on Broadway, starring in the long-running hit musical “A Chorus Line” as the beloved character Zach.

Mario was named the Alumni Ambassador of Fitness by the Boys & Girls Clubs of America (BGCA), joining the ranks of some 25 other prominent alumni, including Denzel Washington and former President Bill Clinton in the organization’s BE GREAT campaign. Via the campaign, Mario helps bring to light the major issues affecting today’s young people, including the importance of graduating from high school and maintaining a healthy lifestyle and the key role community-based organizations like BGCA play in the positive development of children.

Even with all his other ventures, Mario is still in love with acting. Lopez appeared as Dr. Mike Hamoui on eight episodes of F/X network’s popular show “Nip/Tuck,” Lopez’s run on the series bringing an instant and well-deserved cult following. He previously starred in the highest-rated program in ABC Family history, “Holiday in Handcuffs.” He also starred opposite Mark Consuelos in the made-for-TV movie “Husband for Hire,” the most-watched program ever on the Oxygen Network.

Mario currently resides in Los Angeles with his wife Courtney, their daughter Gia, and their son Dominic.