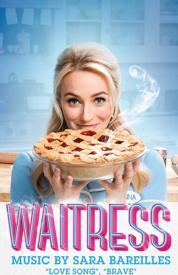 Let me just start my saying that I have never seen or even wanted to see the 2007 film, “Waitress” starring Keri Russell, which this musical version is based on. I wouldn’t have ever even seen the play if it wasn’t for a few of my friends who say the play on Broadway over the last few years and RAVED about it! Suddenly my interest was kicked off and to top it off the musical features music and orchestration by Sara Bareilles. From the opening scene of the “Waitress”, I knew I was hooked.

Here is the official premise of the show: Inspired by Adrienne Shelly’s beloved film, Waitress tells the story of Jenna – a waitress and expert pie maker, Jenna dreams of a way out of her small town and loveless marriage. A baking contest in a nearby county and the town’s new doctor may offer her a chance at a fresh start, while her fellow waitresses offer their own recipes for happiness. But Jenna must summon the strength and courage to rebuild her own life.

Like I mentioned “Waitress” features original music and lyrics by 5-time Grammy nominee Sara Bareilles and I really enjoy the music (listening as I type as well). The songs were strong, uplifting and really beautiful. Desi Oakley, who played the lead Jenna, has an outstanding voice. She really blows you away with some of her songs. They have such range and perfectly pitched. Jeremy Morse, who played the role of Ogie, easily stole the show and was extremely funny. He has previously starred in the same role back in 2015 in the American Repertory Theater staging of “Waitress”. Also really dug that there was a live band on the stage in the background throughout most of the show, which blended in so well I forgot they were their sometimes.

Dr. Phillips Center for the Performing Arts delivered another winning show for me. Being from New York originally and missing Broadway a little, shows like this makes me miss it much less. Here is a little tip since I believe I found the perfect seats for this theatre. We were in Row Q in the Left Orchestra and we had perfect seats, it is at the divide, so no one in front of you and plenty of leg room. Definitely will look for these seats again in the future.

“Waitress” has a lot of heart. It plays to your funny bone the first Act and just kicks you in the stomach for the second Act and delivers a great finish. I believe shows like this are important because they feature strong women and have a positive message of love and the beauty of life. I have to admit one thing that after this show I REALLY wanted me some pie! So make sure to not go hungry because this show will leave your mouth watering.Now if you excuse me I am craving some pie and I need to watch the movie finally!