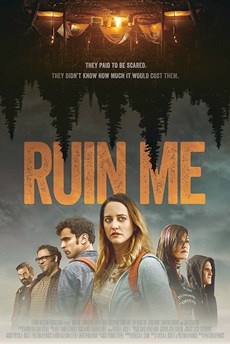 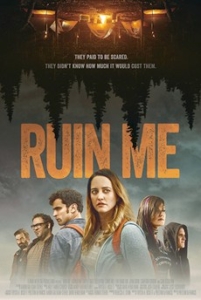 Any horror film buff would certainly take part in a Slasher Sleepout, a 36-hour experience that’s a mishmash of elements from escape rooms, haunted houses and a weekend camping trip. Is this actually a thing? I’m genuinely curious and would probably splurge on it if it existed. At least the six characters in “Ruin Me” did. When we meet the, they have this giddy excitement, that I’m sure I would have before a weekend of cheap scares alone in the woods, solving puzzles. Well, five out of six of those characters at least seem cozy to the idea.

Alex (Dwyer) is lukewarm to the concept. She’s begrudgingly going with her boyfriend, Nathan (Dellapina), who received the experience as a birthday gift from a pal, but his buddy couldn’t go so Alex is his fill-in. You’d think he’d have gone with another friend, or at least someone who’s favorite movie isn’t “Dirty Dancing.” The four other people joining them are all about horror though. There’s the awkward loner who rattles off horror movie references, the stoic weird guy, and an obnoxious Goth couple that has done these kinds of hodgepodge horror getaways before.

Of course, it wouldn’t be a true horror movie if something didn’t go wrong, and things go south quickly. At the beginning everyone plays along with the fake blood, fake mutilated body parts and hooded men in the forest stalking them, but it’s not until people start disappearing and the fake blood becomes real blood. “Ruin Me” has a bit of fun playing with the audience expectations about when things will take a nosedive and how far our characters are still willing to believe that they’re just being toyed with by 21st century carnival ride operators.

“Ruin Me” has a lot of twists and turns after the midway point. Some of the surprises are earned and are actually rewarding while others feel like concepts shoehorned into the script without actually fitting into the overall narrative. Alex, being the focal point of misery as the film progresses, has a lot of the believable twists to her character arc. Some of Alex’s reveals appear sloppy at face value, but they are a lot more believable in hindsight when everything is finally tied together.

“Ruin Me” is a midnight movie romp, which pays off for viewers who love watching characters trapped in sadistic head games. The argument could be made that Alex’s misery and the film’s head games don’t go far enough. It’s a fair point because “Ruin Me” seemingly makes a 180 degree turn in terms of tone at one point, without justifying the pivot. The “fun weekend gone wrong” trope could have easily sustained the movie, but it seems like the intentional swivel was an attempt to subvert. “Ruin Me” isn’t about to spawn a new genre or rewrite the horror movie rules, but it maintains a sense of mystery and excitement for those willing to go on the overnight with the characters. If nothing else, the writers might be on to something with this Slasher Sleepout.