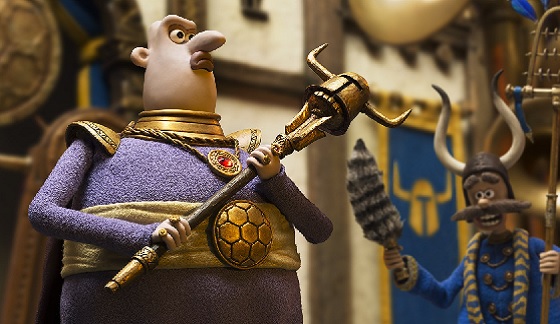 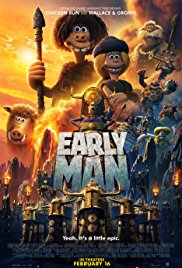 Aardman Animations is probably best known for their characters Wallace and Gromit. This company has been around for nearly 50 years mastering the art of stop-motion clay animation. I absolutely love that format and this company has brought out some great content over the years including “Chicken Run” and “Shaun the Sheep”, unfortunately “Early Man” is not one of their better films. I hate it when I see a trailer for a movie and shriek and say “Oh boy, that’s gonna suck”. In this case, the trailer is 100% right.

“Early Man” takes place in the Stone Age when prehistoric creatures and cavemen roamed the Earth. There is a small tribe of caveman led by Chief Bobnar (Timothy Spall) and they live in a valley where they hunt rabbits. A young caveman, Dug (Eddie Redmayne), has dreams to do more. Their world is turned upside down when a Bronze Age army led by Lord Nooth (Tom Hiddleston) take over their land and force them out into the badlands. Dug seeks out a way to get back his home and challenges the Bronze army to a game of soccer finding out that his ancestors discovered the game before his time…and that about sums of the movie, not much else happens here.

Sitting in the theater, I looked over at my wife and she was yawning. I was dozing off myself as this film was barely able to keep our attention…even our 5 year old seemed bored as well. If you have seen the trailer, then you have seen the whole movie. Tom Hiddleston, known best for his work in the Marvel Universe playing Loki, literally was the best part of the whole film as Lord Nooth. He was funny for sure but can’t save the film by himself.

One comment my wife pointed out, which I happened to notice as well, is that the film is very drab and there was really only one color pallet the whole film. In other stop motion films like “Coraline” color is such an important part of the film. I have to give credit to the animators because I love the craft of stop motion animation and you can tell that a lot of work went into this movie. I just wish I could say that I enjoyed it more but it was simply boring (and only at 89 minutes) and lacking any depth whatsoever. Yawn!