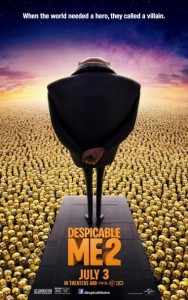 I have so many great memories of “Despicable Me” that I was almost frightened to see the sequel, which, in a lot of instances, are not as good as the original. Happily I had nothing to worry about!

Now “retired” and raising his new family, adopted daughters Margo (Miranda Cosgrove), Edith (Dana Gaier) and the always adorable Agnes (Elsie Fisher), the once evil Gru (Carell) is recruited by Lucy (Wiig) an agent from the Anti Villain League, to help defeat a new bad guy, voiced well by Benjamin Bratt, subbing for Al Pacino who left the project a few months ago. Aiding Gru in his new mission are the lovable Minions (Kevin, Bob, Stuart), whose constant good humor and quirky language would put a smile on even the most miserable person’s face. The Minions are truly one of the greatest creations in animation history. That Gru can tell one apart from the other only makes them that much more fun! There are also a group of feral Minions, a purple toned band of misfits as equally entertaining as their counterparts.

Like its predecessor, “Despicable Me 2” is full of little bits for both the kids and adults. Think of it as a modern take on the old “Rocky and Bullwinkle” show, which was known for its blend of humor that entertained all ages. The voice cast is perfect, with Carell leading the way with his somewhere-from Europe accent and Uncle Fester appearance. Wiig gives Lucy a sweet quality that jumps off the screen. And good for Benjamin Bratt, for delivering a complete performance and doing it in only a matter of months. I have no idea why Pacino walked but he missed out on being part of a very special film.

The production values are outstanding, with the animation literally jumping off the film. THIS is what 3D should be. In fact, the 3D that accompanies the end credits is better than all of the 3D I’ve seen in other films this summer put together.

A joyful delight for the whole family, to not see this film could very well be considered Despicable!