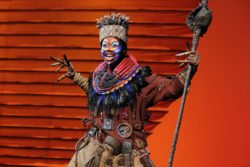 Orlando, FL, January 29, 2018 – Casting has been announced for the Orlando return engagement of Disney’s The Lion King. The show’s first appearance in the Walt Disney Theater at Dr. Phillips Center for the Performing Arts, and it’s third time to Orlando, the four-week engagement runs from February 14 through March 11.

Ticket buyers are reminded that Dr. Phillips Center is the only official retail ticket outlets for all performances. Ticket buyers who purchase tickets from a ticket broker or any third party should be aware that Dr. Phillips Center is unable to reprint or replace lost or stolen tickets and is unable to contact patrons with information regarding time changes or other pertinent updates regarding the performance.

The North American touring productions of The Lion King have been seen by more than 19 million theatergoers. Having already played more than 70 cities across North America, The Lion King now proudly returns to Orlando to make its debut in the Dr. Phillips Center for the Performing Arts.

Shows, dates, times, prices, and artists are subject to change.

ABOUT THE LION KING

In its 20th year, THE LION KING continues ascendant as one of the most popular stage musicals in the world.  Since its Broadway premiere on November 13, 1997, 24 global productions have been seen by more than 90 million people.  Produced by Disney Theatrical Productions (under the direction of Thomas Schumacher), THE LION KING is the only show in history to generate six productions worldwide running 15 or more years.  Performed in eight different languages (Japanese, German, Korean, French, Dutch, Spanish, Mandarin and Portuguese), productions of THE LION KING can currently be seen on Broadway, London’s West End, Hamburg, Tokyo and Sapporo, Madrid, Scheveningen, Holland, and on tour across North America, for a total of eight productions running concurrently across the globe.  Having played over 100 cities in 19 countries on every continent except Antarctica, THE LION KING’s worldwide gross exceeds that of any film, Broadway show or other entertainment title in box office history.

The show’s director, costume designer and mask co-designer Julie Taymor continues to play an integral part in the show’s ongoing success.  The first woman to win a Tony Award for Direction of a Musical, Taymor has in recent years supervised new productions of the show around the world.

The Broadway score features Elton John and Tim Rice’s music from The Lion King animated film along with three new songs by John and Rice; additional musical material by South African Lebo M, Mark Mancina, Jay Rifkin, Julie Taymor and Hans Zimmer; and music from “Rhythm of the Pride Lands,” an album inspired by the original music in the film, written by Lebo M, Mark Mancina and Hans Zimmer.  The resulting sound of THE LION KING is a fusion of Western popular music and the distinctive sounds and rhythms of Africa, ranging from the Academy Award®-winning song “Can You Feel the Love Tonight” to the haunting ballad “Shadowland.”

About the Dr. Phillips Center for the Performing Arts

Dr. Phillips Center for the Performing Arts is a nonprofit 501(c)3 organization operating the state-of-the-art performing arts center in downtown Orlando, Florida. With its opening in November 2014, the performing arts center launched its vision of Arts for Every Life by being a gathering place for creativity and discovery; a vibrant urban destination where artists, audiences and students come to experience, explore and learn. The two-block community destination features the 2,700-seat Walt Disney Theater, 300-seat Alexis & Jim Pugh Theater, Seneff Arts Plaza, Dr. Phillips Center Florida Hospital School of the Arts, the DeVos Family Room, and other event rental spaces. Future expansion includes Steinmetz Hall, a 1,700-seat acoustical theater, along with rehearsal, classroom, office space and commercial development spaces. Dr. Phillips Center is a private non-profit collaborating with the City of Orlando, Orange County, the City of Winter Park, the State of Florida and generous donors.

FAIRWINDS Broadway in Orlando is presented in partnership with Broadway Across America and Florida Theatrical Association. FTA is a non-profit civic organization with a volunteer board of trustees established to ensure the continued presentation of quality touring Broadway productions and the promotion of arts education throughout the state of Florida. For more information, visit FloridaTheatrical.org .

Broadway Across America (BAA) is part of The John Gore Organization family of companies, which includes LionKing.com and The Broadway Channel.  Led by 11-time Tony-winning producer John Gore (Owner & CEO), BAA is the foremost presenter of first-class touring productions in North America, operating in 44 markets with over 400,000 subscribers. Current and past productions include Beautiful, Cats, Chicago, Dear Evan Hansen, Groundhog Day, Hairspray, Hello, Dolly!, Million Dollar Quartet, On Your Feet!, The Producers, School of Rock and Waitress. LionKing.com is the premier theater website for news, exclusive content and ticket sales. For more information please visit LionKing.com and Broadway.com.