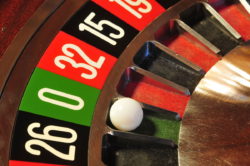 What’s the difference between the American and English roulette games?

Well, go on, how much do you think you know about the devil’s game? Did you even know it’s sometimes referred to as the “devil’s game”? Are you wondering how this nickname came about?

If you add up all the numbers on the roulette wheel, they sum up to 666. That’s why it’s sometimes referred to as the devils game. See, you’ve just learnt something new today – and that’s usually my happiness; seeing my readers getting informed on something new.

Still on the happiness topic, I’ve prepared a brief guide that will help the novice players get to grips on all the differences between American and English roulette; hopefully enabling you to enjoy playing the game.

But before we get to the finer details, let’s have a look define the American and English roulettes using their subtle features.

It’s commonly referred to as the European roulette online and it’s the variant that most players are more accustomed to. English Roulette features 18 black numbers, and 18 red numbers on the wheel, with a single zero which appears as a green. In total, the English roulette wheel has a total of 37 slots.

The American roulette variant is the second most played version of roulette online after the English roulette. The game has all the features similar to the English roulette; in terms of the black and red numbers, with the only main difference coming in the zeroes. Unlike the European roulette, it has both the single green zero as well as an extra double zero, which is marked in green too. This makes the total number of slots on the American roulette wheel to 38.

The difference between the two versions and the best option for you!

Let’s take a look at how the main differences between these two popular versions of roulette influence game play and which version of the two you should start playing.

As already mentioned, American roulette has an extra 00 numbers, which gives it an extra number on the wheel. Novice players might think this is a good thing, given that players will have more betting options to choose from, but on the contrary, it’s a bad thing. How?

A higher house edge on the game means less chances of winning. However, for those who love taking large risks, it could mean better odds because the American version usually has better payouts as compared to the English version.

This bet can only be placed on the English roulette and it offers you with an opportunity of recovering your stake after you spin a zero as the outcome. However, there’s a condition attached to it; you have to place an even money bet i.e., odd-even, red-black, etc. This bet will be placed ‘en prison’ and then carried over to the next spin. Should your bet win on the next spin, your initial stake will be refunded but if you lose, the bet shall be forfeited.

As mentioned, this bet is only offered on the English Roulette games and it’s not available on the American Roulette variants.

This article provides some additional key differences between the two.

So which is the best game for you?

It has been said from time to time that the best option as you play mobile or online roulette is to avoid the American version! If you are a novice player, then playing European roulette absolutely makes sense, but even the savvy players shun the American version because it remains harder to win.

All in all, the English Roulette version is the clear winner for all and luckily, you can play different versions of the game online.