Matt Montgomery aka Piggy D is probably best known for his work as the fanged four string player in Rob Zombie, a position he has helmed for over ten years. Matt’s latest project The Haxans is the culmination of three years of work which have resulted in the band’s debut full length “Party Monsters”. Media Mikes had the chance to speak with Matt recently about the band, the albums creation and where things are at with the latest Rob Zombie album.

Adam Lawton: Can you tell us how The Haxans initially came together?

Matt Montgomery: This was an idea I had kicking around for some time. I had been working on music with a girl back and forth for years. At first we started by sending CD’s with ideas on them to each other through the mail. It was very archaic. We had two songs under The Haxans name but it was just never really a good fit as we both were going in different directions musically. I knew in order to do this the way I had envisioned it I was going to have to make a change. By chance I met Ash Costello at an awards show through a mutual friend and thought she would get what the project could be. We started hanging out and finding out what stuck musically and that’s when things really started to take shape and become something.

AL: Is the “Party Monsters” album made up of all new material or does it contain ideas from the bands earlier incarnation?

MM: We started recording three years ago. What came out first was “Three Hits From Hell”. That was us trying to find our footing and musical finger print. The oldest song which is still kicking around is “Black Cat Bones” which Ash and I reworked and it made it on to “Party Monsters”. We tried a whole bunch of things both new and old for this record. Its funny how one person’s energy can change the room as I would pull some of the older songs out that I was excited about but after working on them a little bit they just didn’t have the same feel I had hoped for. We really tried to go for what made us both excited and that’s the stuff that kept making it through the filters. There was a lot of material we went through but we went with what made the clearest statement of what the record and we as a band were about.

AL: How does working on a project like The Haxans compare to the work you do with Rob Zombie or some of your other previous groups?

MM: Going back to my work with Wednesday 13 what people saw of 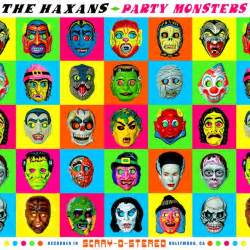 me with that group was basically just from a live stand point. I never wrote any riffs or lyrics with them. With Rob I have wrote a little but not very much. There has been I think two songs on two records in the time I have been with him. I played on all the records but I wasn’t the guy sitting around for months figuring out where all the riffs would go. In a way “Party Monsters” is the first thing I have done since my first solo record that I did a long time ago. This album is in a way my first music statement since being a part of groups like Amen, Wednesday 13 and Rob Zombie.

AL: Can you tell us about the most recent video you filmed for the song “Young Blood”?

MM: This is our fifth video as a group and fourth for this album as we have done videos for “Vampira”, “Dirty Magic”, “Black Cat Bone” and “Lights Out” as well. We actually shot five videos in three days. “Young Blood” was shot during the first half of one of those days. We knew visually what we wanted for that one. I directed the last four videos and that made things easier as I knew what shots I wanted to get and where I wanted the camera. I only had to be in one so the rest of the time I was making sure we got coverage of everyone else. We story boarded everything beforehand but we still had to hurry to get everything done.

AL: How did you go about choosing which five songs were going to get video treatments?

MM: That was tough. You just have to listen through the songs and get everyone’s input as to which might be the ones to choose. Of course everyone has their own opinions so it can make things be a bit all over the place. The feedback I got from those who heard the songs all mentioned the songs we shot so we decided to start with those ones.

AL: Have there been any talks to do some live performances of this material?

MM: There has been a lot of talk about doing shows and we have made a few attempts however nothing has come together just yet. We were looking at options to tour in the first quarter of 2018 however schedules just are going to match up. Touring sort of goes hand and hand with why this record took three years to make. Ash and I are these two whirling tornadoes that randomly collided and that’s what we are trying to contain which is just impossible. (Laughs)

AL: Can you give us a quick update on where things are at with the new Rob Zombie album and anything else you might have in the works for 2018?

MM: I have heard things and it’s fucking nuts! It’s really awesome and that’s about all I am going to say. There is a lot of material and things are still in the demo stage so I have yet to go in and play my parts just yet. As for what else is in store for 2018 I am not sure. You would think after being in bands for so long the last thing I would want to do at my age is start another band but, I might, maybe I will start two! There are a lot of things on the list that have been there for some time but I think it’s that way for everyone. We will just have to wait and see.