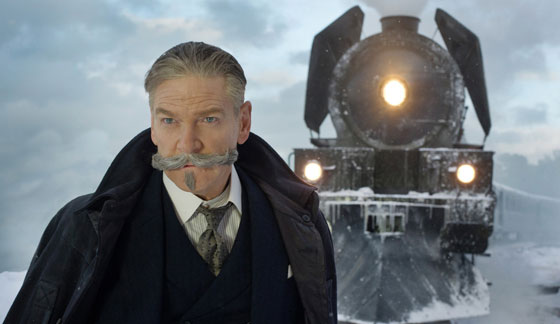 One of the most impressive ensemble casts of the year seems lost in sweeping CGI landscapes and overstuffed set pieces. “Murder on the Orient Express” is geared more towards technical film geeks who enjoy richness in their production design, more than they do in the script or the acting. I only say that because “Murder on the Orient Express” is awfully pretty to look at, but there isn’t much behind the lens.

Through happenstance, world-renowned detective Hercule Poirpot (Branagh) has found himself on the Orient Express. The luxury train connects Istanbul to the rest of Europe, which means the train is filled with socialites heading back to the Western World. The hodgepodge of characters seems at odds during casual dinner and indifferent during coffee, but there’s a singular thing that connects them all. It’s something Detective Poirpot will have to uncover after a passenger is found murdered in his cabin.

Murder mysteries are usually good, if not Oscar bait this time of year. However, “Murder on the Orient Express” is neither. While I haven’t read Agathe Christie’s work or seen the previous adaptations of her work, I can still confidently say that this isn’t on par with its predecessors or source material. I can surmise this because of how ambitious it looks, but the story never matches that visual gusto.

Johnny Depp plays the murder victim, but he’s not painted as a victim. We’re told he’s a scumbag, but we never feel like he’s one, despite the overwhelming evidence. The others on the train are played by the likes of A-listers, like Judi Dench, Willem Dafoe, and Michelle Pfeiffer, while up and comers, like Josh Gad, Daisy Ridley and Leslie Odom Jr. round out the cluster. The ensemble is too overwhelming, visually and narratively, with the film struggling to divvy up enough even time for the audience, and Poirpot, to question the lengthy list of suspects.

For those unsure of how this film will play out, like me, it’s slightly interesting in some spots to watch Poirpot work out the tangled web surrounding the murder. For those who love a good whodunit, you may not be disappointed, except for how the end and reveal is executed. “Murder on the Orient Express” is a classic in the literary sense, but this 21st century retelling offers nothing new.