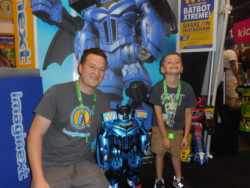 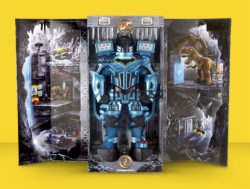 New York Comic Con has become the premier East-Coast destination for all things pop culture and 2017 was no different. New to the convention floor this year was Fisher Price’s Imaginext toy  line which features a wide variety of multi-faceted play sets, figures and vehicles taken from the pages of the DC universe. As an exclusive for this year’s convention Imaginext creators brought a special themed version of their DC Bat-Bot Xtreme for a lucky few to purchase. Media Mikes had the chance to speak with designer Rob Hageman about the piece as well as what the brand has in store for this year’s holiday season.

Rob Hageman: We actually started off by making a smaller version of the toy. It had all the same workable features and everything but when we got it all done we realized it would be cooler if we made it a lot bigger. The smaller version was great but once kids got a hold of the larger version that’s the one that everyone really enjoyed.

IL: Can you tell us about some of the feature on the Bat-Bot Xtreme?

RH: I think the best feature is when you turn one of the action discs as it opens up the wings of the robot. Once you do that you have access to the punching power triggers on each hand. You can also fire discs out of the fists as you punch. Across the top are a number of buttons which shoot several rockets. On the opposite foot of the robot is another action disc which opens up the chest of the robot to reveal an elevator which takes figures up into the head of the robot. Also featured is a voice changer which allows you to talk into the back of the toy and transform your voice in to that of a robot. There is a hidden bat cycle in one foot of the robot which can be shot out while the other foot features a jail for locking up any bad guys.

IL: The Comic Con version of the Bat-Bot Xtreme is different from 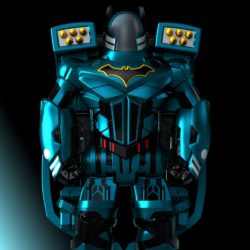 the one in stores. Can you tell us about that?

RH: There is a comic book version of this robot that is much more metallic than the retail one. The retail one is still super cool but it’s done in standard blue plastic where the 300 we did for Comic Con have a special blue metallic paint job that is closer to what is seen in the comic. With this special version I really was trying to make sure it looked as close to the one pictured in the book. The exclusive version also comes with in special packaging featuring some really great art work, magnetic switches and LED lights.

IL: How do you decide which characters you are going to make into a figure?

RH: Each year all the designers get together and draw a bunch of concepts. We will take them to the team and give them our best pitches for each one. From there we work as a team to finalize designs and figure out which look the best, are the most relevant and will help Imaginext flush out the DC Universe.

IL: What other characters/figures are you set to release?

RH: We have Mongul and Green Lantern set to come out along with Black Canary and Night Wing around Christmas time. Also set to come is Steppenwolf as well as Swamp Thing and Survivor Batman. I think that’s probably one of our best packs we have done so far.

IL: How would someone go about becoming a toy designer?

RH: When I was a kid I loved to draw and it was something I always did. I would draw my toys along with other toys I may have wanted. I also drew a lot of robots as I love robots. When I got to high school a teacher of mine had a friend of his who worked for a toy company come to class. He brought in all the things he had worked on and told us it was his job to make toys. I knew then it was something I wanted to do. I kept drawing more and more and after high school I went to art school and focused on toy design. I am now doing what I wanted to do ever since high school.

IL: What has been your favorite toy that you have created/worked on?

RH: My favorite is the regular Bat-Bot which transforms from a tank to a robot. It was an uphill battle for me to sell that in as I wanted the transformation to be able to happen while the toy was still in the package. I wanted there to be two different forms while making things easy to maneuver and play with. The voice on it is really great as well.