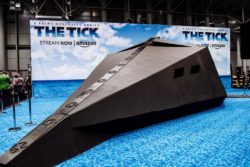 Fans looking to escape the crowded New York Comic Con show floor this past weekend were taken care of by a pair of immersive ‘activations’ presented by Amazon Prime. On site at the Jacob Javits Center, the streaming service introduced two of its newest series, The Tick and Lore, in style. I was fortunate enough to spend time exploring both experiences with some friends over the course of the con weekend and needless to say, they got me hyped to check out the shows. 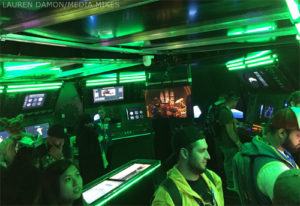 My first stop was The Tick’s massive Dangerboat installation on the upper level of the con. Dangerboat is not just the headquarters to the Tick’s nemesis, Overkill, but also has a sentient artificial intelligence all its own (on the show he’s played by geek icon Alan Tudyk). In keeping with that, NYCC’s Dangerboat was also talking and fully sentient and began immediately interacting with my crew when we boarded.

Both of Amazon’s experiences were connected to an RFID wrist tag that we registered before entering. In Dangerboat the tag was used to print out our custom Aegis database ID as well as getting our own tin of FO HAM. Thankfully the tin actually contained “NEAT!” Tick pins and not canned meat. Dangerboat concluded with a fun green screen video op that with yet another swipe of wrist tags was emailed or posted wherever we chose. All told, Dangerboat took my group about a half hour to fully interact with due to the level of options on the various screens, not to mention the funny rapport we developed with a sentient boat(!) which was pretty incredible as far as con setups go. Whomever was the mind behind Dangerboat certainly captured the humor and spirit of the show itself and provided some of the best laughs of the weekend. 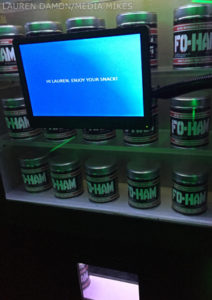 About The Prime Exclusive Series, The Tick:
“Bursting with scabrous original storylines that turn on a dime, The Tick is a comedy with kinetic action, a wryly inventive visual style and crisply quotable dialogue. Heroes have flown among us for decades but mild-mannered accountant Arthur Everest (GRIFFIN NEWMAN) one day finds out there are also genuine bad guys in this new Amazon Original Series. He believes he has proof that The City, where he was born and raised, is actually controlled by a global super-villain known as the Terror (JACKIE EARLE HALEY). Destiny soon brings Arthur together with an eccentric, tall, blue-suited muscleman with a mysterious past and list of superpowers: The Tick (PETER SERAFINOWICZ). The title character serves as both the conscience and the unchecked id of the story. Citing the call of destiny, the Tick procures for Arthur a moth outfit with retractable wings and insists that he suit up as his sidekick. He and Arthur are the ultimate odd couple, but may just bring out the best in each other. In their quest to take back The City, the unlikely pair of heroes quickly sees just how complex the struggle between good and evil has become.”
The Tick returns to Amazon on February 23rd 2018 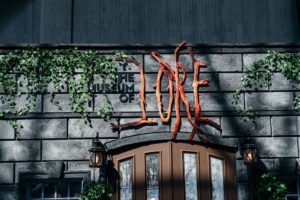 Descending down a level into the Museum of Lore was yet another unique RFID experience and definitely welcome this Halloween month. Based on the hit podcast, Lore sets out to retell the true life macabre stories that inspire some of horror’s most notorious tropes. In a series of interactive rooms, my group tromped through haunted dolls, magical mirrors and werewolves as presented by a trio of delightfully over the top actors. Utilizing our RFID bands, we were rewarded with messages from The Other Side and a cool photo souvenir over a pretty twisted werewolf buffet…. 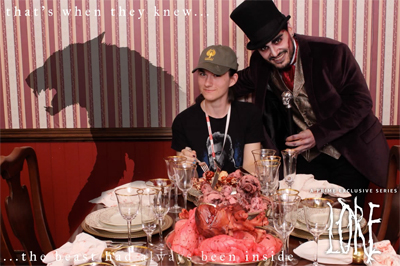 About The Prime Exclusive Series, Lore:
“Sometimes the scariest stories are true. Lore is based on the global, award-winning podcast sensation from creator Aaron Mahnke, and executive produced by Ben Silverman (The Office), Howard T. Owens (The Biggest Loser), Gale Anne Hurd (The Walking Dead), Brett-Patrick Jenkins (Face Off), Glen Morgan (X-Files), Jon Halperin and Mark Mannucci (A Year in Space). Lore brings the podcast to life and tells the real life origin stories that have led to our modern day myths and legends, including vampires, changelings, werewolves, séances and possessed dolls.”
Lore is fittingly debuting on Friday October 13th.