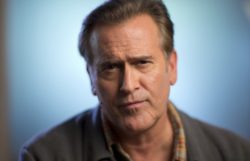 If you’re not aware of Bruce Campbell you may have stumbled onto this web site in error.

A working actor for four decades, Campbell is probably best known for his role of Ash in the “Evil Dead” films and TV series, but has also turned in fine performances in such films as “Bubba Ho-Tep,” Congo” and the television series “Burn Notice.” Mr. Campbell is also an author, currently touring the country in support of his third and latest book “Hail to the Chin: Further Confessions of a B Movie Actor.”

He’s promoting his book and hosting his interactive game show, “The Last Fan Standing,” at the Kansas City Alamo Draft House. While traveling the country to promote his work, Mr. Campbell took a few moments out of his busy schedule to speak with Media Mikes!

Mike Smith: You note in your new book that you’re now at a time in your career where it’s easier to say no to a role. Was there ever a role in the past that you regret not accepting?

Bruce Campbell: Nope. Nope. Because if you don’t like the work that is on the page you’re not going to like the work that is on the stage, as they say. Which means if you didn’t like it on paper you’re not going to like the finished film. That’s the blueprint for the movie…the script. I mean I’ve never turned anything down and later went, “Wow, they made that piece of shit turn out pretty good!” (laughs) I always feel confident that when I turn material down it’s because it’s not strong material. That’s the best way to go, instead of thinking “you know, maybe that director can turn it around” or “that actor could be good in that crappy part.” So now I intuitively go to the script now and if the script isn’t good I’m not going to do it. 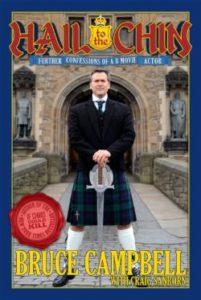 MS: You note in the book that, while working on “Spider-man 3,” Toby McGuire tongue-in-cheek commented that “we can’t make a Spider-man movie without Bruce Campbell!” Were you approached to appear in either of the re-boots?

BC: No I wasn’t. And I wouldn’t have anyway because if Sam’s not doing it I’m not doing it. (NOTE: Mr. Campbell has collaborated no less then nine times with director Sam Raimi. He is also a favorite of the Coen Brothers).

MS: Can you tell us what fans can expect when the participate in your interactive game show “The Last Fan Standing?”

BC: It’s a really fun show. My buddy Steve Sellery had called me and wanted me to come host a game show for the troops. He works for the military. So I went to a base in San Antonio with this game. The format is that everyone in the audience has a clicker. Everybody plays. We don’t weed anybody out. We don’t hand select. We don’t vet anybody. They could be an idiot when they get up there. (laughs) We begin with some preliminary rounds. It’s a regular game show format but it’s different in that it’s a game show for geeks. We have questions like “How much does Thor’s hammer weigh?” Questions that only geeks would know. But after I thought of a trivia show for the troops I told Steve that this would translate perfectly into my world. We’ve done it dozens of times and now we’re taking it on the road to 17 or so cities. (NOTE: Thor’s hammer, Mjolnir, is said to have been forged from the inside of a star, which would make it pretty damn heavy. Some comics have it being made of Uru, a metal found only on Asgard. The Uru version is said to weigh 42.3 pounds)

MS: Your new books ends with the words END OF CHAPTER TWO. Are you gathering new stories now for CHAPTER THREE?

BC: Every day. Every day, my friend. Every day is a new adventure! I’m thinking that in 15 years I’ll publish my final confessions. That will be MY George Lucas trilogy.