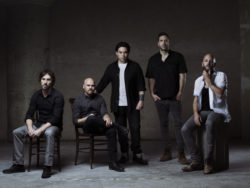 10 Years presents lead video for the song “Novacaine” in front of new album “(how to live) AS GHOSTS” coming October 27. 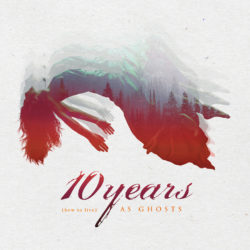 ABOUT 10 YEARS
10 Years has come a long way since their inception in 1999. The band landed a deal with Universal/Republic Records on the strength of their two independent releases, 2001’s Into the Half Moon and 2004’s Killing All That Holds You. Their major label debut, 2005’s The Autumn Effect, debuted at No. 1 on Billboard’s Heatseekers Album chart thanks to their breakthrough hit, “Wasteland,” which topped Billboard’s Modern Rock Tracks chart, and “Through the Iris,” which hit No. 20 on Billboard Hot Mainstream Rock Tracks. The band followed that success with 2008’s Division, featuring co-production work from Rick Parashar (Alice In Chains, Pearl Jam). The album peaked at No. 12 on The Billboard 200 and spawned the hit “Beautiful,” which reached No. 6 on the Hot Mainstream Rock Tracks. The momentum continued with 2010’s Feeding the Wolves, which was produced by Howard Benson (My Chemical Romance, 3 Doors Down) and bowed at No. 17 on The Billboard 200, while the single, “Shoot It Out,” peaked at No. 6 on Hot Mainstream Rock Tracks and spent 25 weeks on the chart. The group, which toured the world with such rock greats at Linkin Park, Korn, and Deftones, went back to their indie roots with 2012’s Minus the Machine on their own Palehorse Records, which was part of Warner Music Label Group. The album debuted at No. 2 on the Hard Rock Albums chart, No. 8 on the Top Rock Albums chart, and No. 26 on The Billboard 200.