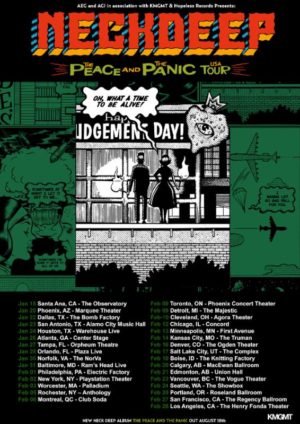 Upcoming Album, “The Peace and The Panic”,
Available For Pre-Order through Apple Music

Neck Deep took some time out of the last few moments of their headline set on this summer’s Vans Warped Tour yesterday announcing to fans that they will be returning to North America early next year for a headlining tour. This tour will bring Neck Deep to Santa Ana on January 18th and take them across the United States and Canada to cities like Seattle, Orlando, Toronto, New York, and Kansas City before returning back to Los Angeles on February 28th. The band will be touring in support of their highly anticipated album, The Peace and The Panic, due out August 18th via Hopeless Records. Ticket packages are now available for pre-sale to the Neck Deep Soundcheck Club with general on-sale beginning this Friday, August 11th at 10am Local Time. For tickets, please head to https://www.ndsoundcheckclub.com/.

Neck Deep gave fans a sample of what this upcoming tour will be like when playing songs “Where Do We Go When We Go,” “Happy Judgement Day” and “Motion Sickness,” off the new record live on Warped all summer long. All three songs have seen support from places like Apple Music, Spotify and Amazon playlists, along with numerous radio spins and features on SiriusXM.

If you cannot wait until 2018 to see the band, they recently announced a special run of U.S. acoustic in-stores and signings. Fans who pre-order the album directly from the store will receive guaranteed entry to the acoustic set and signing. Limited space is available. The participating stores include Looney Tunes in West Babylon, NY, Gallery of Sound in Wilkes-Barre, PA, F.Y.E. in Philadelphia, PA, Sound Garden in Baltimore, MD and Vintage Vinyl in Fords, NJ.

The upcoming 11-track album, produced by Mike Green (Pierce The Veil, Paramore), is a meditation on the constant duality of life and the struggles that come with it. It comes blessed with an acknowledgement that seizing the day and having a laugh with your mates is important, but so is the personal growth that comes with pain and existential crisis. The Peace and The Panic is now available for pre-order through Apple Music or at https://neckdeep.lnk.to/TPATP.

For more information on Neck Deep, The Peace and The Panic and this upcoming tour, please visit http://neckdeepuk.com/.