It’s a difficult experience to summarize, but upon arrival back home in Kansas City, I’ve told people that it felt like a nerdy rite of passage. MediaMikes has had the pleasure of attending New York and Kansas City’s Comic-Con’s, but for the first time, we can now add the honor of attending San Diego Comic-Con to that list.

There are inevitable growing pains for those who have never attended the San Diego Comic-Con, no matter how much research beforehand is done. And if word on social media was correct, there are continuous growing pains for regular attendees. The first hurdle was the agonizing wait time to see if we would be one of the lucky few to get into Comic-Con and then came the mad dash for available hotel and AirBnB space. Following that whirlwind is the announcement of events, panels, and celebrities. Some of them announce a few weeks out while others pop-up announce their intentions the day of.

However, that overwhelming spectacle aspect is put on the backburner for opening night on Wednesday. For a handful of hours, the massive vendor and exhibit hall was opened for the tens of thousands already in scenic San Diego. For those thousands, some had waited outside all day, while others, like me, walked in after the initial stampede. A sensory explosion of lights, sounds and excitement filled the halls as the talk on the floor was of SDCC specific goodies already being sold out. I spotted folks who already had multiple bags of merchandise in tow while others waited in lines for exhibits like “The Walking Dead” and “Star Wars.” 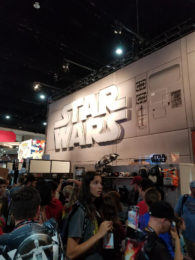 Despite the giddy joy within the SDCC halls, the 79 degrees and sunny skies made it hard not to enjoy the various outdoor exhibits around the convention center. They may as well be more popular than the convention center itself because you don’t need a pass and it’s free. Netflix, “The Walking Dead,” “Westworld,” SyFy, Adult Swim and others were on point with their outside exhibits. Not only did they offer up swag, ranging from shirts and bandanas, but some offered legitimate exclusive items along with fresh food and a refreshing bottle of water.

While talking with others exploring the sprawling nerdified cityscape outside, I began to understand the behemoth known as Hall H. For those who don’t know, Hall H is where Marvel, FOX, DC, and others unveil previews and have panels focused on the hottest shows and movies for nerdy pop-culture. When you crunch the numbers, around 5% of attendees are only able to squeeze into Hall H for a panel. Some were lucky enough to step inside, including our very own Lauren Damon. But for those on the outside looking in, waiting in a line to wait in a future line seems like pure insanity when there are other panels at smaller venues.

Because Comic-Con has grown so big, it’s hosting panels in a nearby library, while also packing over 15,000 people into the home of the San Diego Padres, PetCo Park. Multiple panels were even jammed into the nearby hotel meeting rooms, while the nightly festivities spilled into the nearby Gaslamp Quarter. My and Lauren’s experiences have their merits, going balls out for Hall H or enjoying nearly every display and participating into those off the beaten path panels. If you were to ask me or Lauren about our experiences, they’d both be positive for widely different, but solid reasons.

With hundreds of thousands in town, there’s an argument over whether or not SDCC is worth the “Hunger Games” dash for tickets and lodging, the long waits, and the sore feet after four days of walking and standing. We at MediaMikes say it is. It’s a one-of-a-kind experience that transcends all ages and turns out to be an unforgettable weekend for all in attendance. There may be times of frustration, but the moments of pure nerdy ecstasy, like watching the latest “Thor: Ragnarok” trailer in a crowd of thousands of screaming people or geeking out over Matt Groening revealing that “The Simpsons” writers have been asked to tone down their criticism of Fox News, make SDCC a lifetime memory.

For those who’ve attended before, you’ve made up your mind about where you stand on attending the world’s largest comic-con. Once may be enough, but from what I gathered from talking with complete strangers on the hall floor, on the street and at the bars, it’s a yearly pilgrimage once you’ve had a taste. But for those who have been on the fence for years about whether or not to attend, just do it. Keep in mind that you have to choose your time wisely because those five days (or fewer) go by quickly. Here at MediaMikes, we’ve gotten our feet wet and can’t wait to dive head first next time.