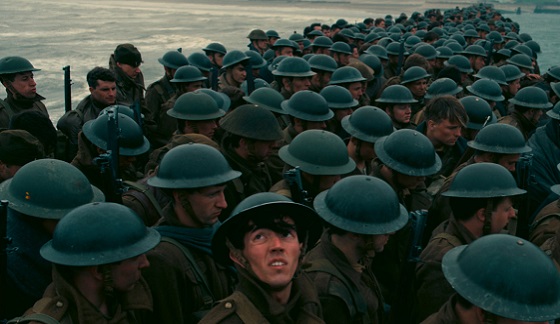 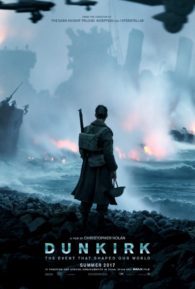 Even though it was one of the most important events of World War II, the story has rarely been told. 400,000 soldiers trapped on a French beach in the early days of the war. That tale is now front and center in the latest film by Christopher Nolan, “Dunkirk.”

June 1940. As the battle in France intensifies we happen upon a group of English soldiers. They walk quietly through the deserted streets, trying to avoid detection. Suddenly a shot rings out. Then many. They run for cover but to no avail. One manages to escape and joins others on the beach.

In England, the British Navy is requisitioning civilian watercraft to travel across the channel to help evacuate the troops. One of the boat owners, Mr. Dawson (Rylance) is readying his yacht with his son, Peter (Tom Glynn-Carney) and Peter’s friend, George (Barry Keoghan). However, rather than turn his boat over, Mr. Dawson decides to push off and make the journey himself.

High above the Channel, a pilot (Tom Hardy) gathers with his squadron mates to begin a sortie to give cover to the evacuation. It’s a high risk game of distance, altitude and available fuel. The slightest miscalculation of any or all three can spell certain death.

Told as three separate stories (Mole, Sea and Air) in three different time narratives (from a week out to a day to an hour before) “Dunkirk” is more of a thriller than a full out war film. Director Nolan, who also wrote the script, weaves the three stories together seamlessly, giving each story ample time to develop. He also has filled the cast with young actors who do a good job in projecting the fear and anticipation that war can bring. Besides misters Whitehead, Bonnard, Glynn-Carney and Keoghan, I must add pop star Harry Styles to the list. Though not a large or showy role, it is an important one, and if he ever decides to give up music he has found another profession in which he can succeed. If I have one complaint about the acting it’s that Nolan has attracted such talents as Mark Rylance, Kenneth Branagh and Tom Hardy but has put them in roles that don’t require a lot of acting. Both Rylance and Branagh have been recognized alongside a small group of actors as the best Britain has EVER produced and Hardy is always a treat to watch on screen. Would have loved to have seen them seriously chew some scenery.

The film is beautifully shot, and the musical score by Hans Zimmer accompanies the on-screen action perfectly. That being said, I expected a lot more action in what was being sold in the trailers as a “war film.” Why have 400,000 troops, a couple destroyers and a few squadrons of airplanes if you’re only going to use them sparingly? Anyone?