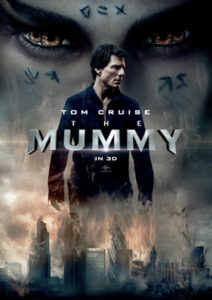 After seeing the first trailer to “The Mummy” starring Tom Cruise, I have to admit, I rolled my eyes a little and said “Oh boy” and I wasn’t sold on a female mummy plays by Sofia Boutella. So going into the movie, my expectations were kinda low but I was hoping to really dig it. Let me tell you from the moment this movie started I was HOOKED, till the moment it ended! I loved it. I thought that it was a perfect start to Universal’s new planned “Dark Universe”, which will feature all the classic monsters. I love the old monster films and they are just begging for an actually good big screen revival. “The Mummy” is a non-stop action packed, scary as hell must see Summer flick! Do not miss this film!

Official Premise: Nick Morton (Cruise) is a soldier of fortune who plunders ancient sites for timeless artifacts and sells them to the highest bidder. When Nick and his partner come under attack in the Middle East, the ensuing battle accidentally unearths Ahmanet (Boutella), a betrayed Egyptian princess who was entombed under the desert for thousands of years. With her powers constantly evolving, Morton must now stop the resurrected monster as she embarks on a furious rampage through the streets of London.

From the trailers, I wasn’t sure if this movie was going to be more action than horror but let me tell you it packed some great scares and was creepy as hell. I was honestly shocked cause it was freaking scary in parts…yet still packed some amazing action scenes. I am sure that till film will be compared to “The Mummy” film series with Brendan Fraser but it is completely different. That series was more like an Indiana Jones copy. This series feels much darker and surprisingly more fun as well.

Big surprises in the cast were Jake Johnson (known better as Nick Miller from TV’s “New Girl” and “Jurassic World”). He steals the show and gives the film a real ode to “An American Werewolf in London”, which I dug a lot! Great addition. Also Russell Crowe, yet again, surprised us all showing up as Dr. Henry Jekyll, which adds so much to the film and plans for future development. He nails the role perfectly and I can’t wait to see more of him in future films in this new “Dark Universe”.

I am sure “real critics” are going to tear this apart but if you are a true genre fan, this is a fantastic kick off to this new shared universe that Universal is creating and real fun/scary film to enjoy this Summer. It also delivered a great lead-in/back story that adds some great mythology to the film as well…and the best part about this film is that the trailer doesn’t give it all away like in other recent films this Summer (talking about you “Alien: Covenant”). So be sure to head to the theaters and have a blast with this one and let’s ensure that Universal has the opportunity to continue their “Dark Universe” but I am dying to see what they come up with next for “Bride of Frankenstein” in 2019.