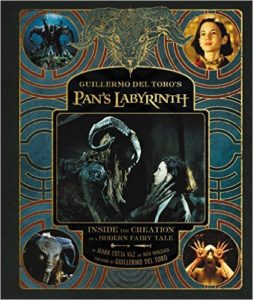 This seems to be the year of “Pan’s Labyrinth” getting a resurgence. The film is celebrating it’s 10th anniversary (can’t believe that it has been that long already). This film has been one of my favorites and one of the best from Guillermo Del Toro. When it comes to a visual eye, he is the man to deliver and this film is overloading with beauty and style. “Guillermo del Toro’s Pan’s Labyrinth: Inside the Creation of a Modern Fairy Tale” gives us an exclusive look into the making of this wonderful modern marvel and does not disappoint. It also is stocked tight with a foreword by Guillermo Del Toro himself. I love his passion and it shows how much work and effort in each one of his films. This is a must owe book for any fan of “Pan’s Labyrinth”.

Official Premise: To celebrate the tenth anniversary of this acclaimed fantasy, Guillermo del Toro’s Pan’s Labyrinthprovides the definitive account of the film’s creation. Written in close collaboration with the director, this volume covers everything from del Toro’s initial musings, through to the film’s haunting creature designs, the hugely challenging shoot, and the overwhelming critical and fan reaction upon the its release.

The book dives deep into the production of this amazing movie with some beautiful concept art and rare set photos. If you are looking for the ultimate behind-the-scenes look into Guillermo del Toro’s Pan’s Labyrinth then look no further than this book! It is not just pretty photos though this book also has interviews with the film stars Ivana Baquero, Sergi López, Maribel Verdu, and Doug Jones and also key players like producers Alfonso Cuarón and Bertha Navarro; and director of photography Guillermo Navarro. This film is a classic and this book represents it perfectly!