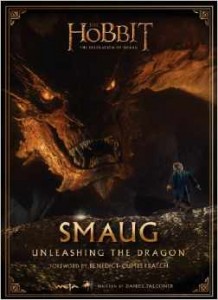 When it comes to Peter Jackson’s “The Lord of the Rings” or his new trilogy “The Hobbit”, I simply cannot get enough. I absolutely love these films and I love any type of behind-the-scenes look into the world that he has created. In “The Hobbit: An Unexpected Journey”, we got to catch a glimpse of the dragon Smaug. Fans were left wanted more. In “The Hobbit: The Desolation of Smaug”, we got to go face-to-face with this amazing character in the film and he no question stole the show. Benedit Cumberbatch’s motion capture performance of Smaug was outstanding and left me speechless. This latest book from Harper Design is dedicated only to marvel that is Smaug. We get to go behind-the-scenes and see how this wonderful character was brought to the big screen. If you are a fan of “The Hobbit” films, this is a must own.

Bringing Smaug to live was done by the amazingly talent artists at Weta Workshop. It includes some of the most advanced special effects and computer animation in a film today. I was so excited that Smaug received his own book, but at first clance I was disappointed since it is a rather small book in size but from the minute you open it, it is end to end packed with amazing content. There are brand new exclusive images, concept designs, artwork, photographs and painting for this amazing character. As a fan of the film, I literally could not put this down. You really get to dive into the world of Smaug and see how this amazing beast was created and brought to life.

The first section of the book focuses on how the dragon was imagined and designed. The second section dives deeper into how Weta Design created the character in a more “making of” fashion. There is everything from chapters on models, textures, shading, ADR, animation, lighting, sound design and visual effects. There is a nice focus on the film’s final moments as well with stills, so if you haven’t seen the film and don’t like spoilers I would avoid that section. Actually to me seeing Smaug himself is a big spoiler so I would recommend watching the film first. Also the man behind the beast, Benedit Cumberbatch gives a great foreward to the book as well talking about his performance for the dragon, a great way to kick off the book.

Harper Design has been a big supporter of the new “Hobbit” trilogy. They have released three books to date giving fans an outstanding behind-the-scenes look into these films. The first two books are for “The Hobbit: An Unxpected Journey” called “Chronicles – Art & Design” and “Chronicles – Creatures & Characters”. The third is “The Hobbit: The Desolation of Smaug Chronicles – Art & Design”. The next book from the second film will be “Chronicles – Cloaks & Daggers” coming July 8th. Then we can also expect two more books from the final film as well, “The Hobbit: There and Back Again”, so the fun is far from over! Stay tuned and keep them coming Harper Design, these books are amazing!