LOS ANGELES, CA — (TUESDAY, June 21, 2016) – Celebrating 35 years as a band, 2016 is proving to be a very good time for thrash/metal icons Anthrax, and the festivities are intensifying. First, today Anthrax is releasing the third lyric video from their new album For All Kings, this one for the track “Zero Tolerance.” The song closes the album and its message is very personal and particularly timely in today’s society, with the horrific rise in mass shootings and other forms of terrorism. In the words of Anthrax lyricist Scott Ian, “‘Zero Tolerance’ sums it all up. It’s about doing anything to protect your small circle of family and friends from the insanity of the world.” Check out the lyric video for “Zero Tolerance” here: https://www.youtube.com/watch?v=T1_HKsoql1Y

The truth of humanity is far from insane
It’s focused, it’s cruel, it’s hearbreak and pain
As if I needed more reasons to hate
A savage decision that’s not hard to make
Family and friends, dare to threaten what’s mine
I kill motherfuckers for crossing the line
Tighten the noose round my life and I choose
Murder and mayhem ’cause I’m worse than you 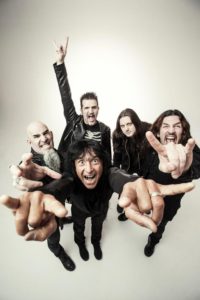 Anthrax’s 35th anniversary year will also see the band spending the bulk of June, July and August playing major music festivals throughout Europe. These will include France’s Hellfest and Download, SwedenRock, Graspop in Belgium, and the UK’s Bloodstock, as well as playing select dates with Slayer, Iron Maiden, and a handful of headline shows.

Then, the 35th anniversary will culminate beginning September 9 in Cleveland when Anthrax will join forces with Big Four comrades Slayer for a seven-week North American tour of major and secondary markets. This trek will also include appearances at several major North American music festivals including Ozzfest Meets Knotfest on September 25 in San Bernardino, CA.

“I find it hard to believe that all this time has gone by,” said Anthrax’s Charlie Benante. “I still feel like I did when we were first recording our Spreading the Disease album. For All Kings has been so well received, it really does make us want to take this to another level. I think it’s all so encouraging that, after all these years, here we are hanging out with out metal alumni Slayer. The two bands have never been better at what we do, that’s encouraging for the future of music.”

Added Scott Ian, “July 18, 1981 is the day I started playing rhythm guitar in Anthrax. Thirty-five years have passed since that day and my life has changed profoundly. I am a husband, I am a father. I am a long way from the 17-year-old soon to be college dropout that co-founded a heavy metal band. The only thing that hasn’t changed in 35 years, the one constant, I am still the rhythm guitar player in Anthrax. It’s what I GET to do. I GET to play in a band and I never take that for granted. It is a privilege. And the reason I GET to be in Anthrax is because for 35 years, people all over this planet have connected with what we do. There wouldn’t be an Anthrax if it wasn’t for the fans that heard something in our sound that made them want to bang their heads all those years ago. Together over these 35 years, we became part of something that changed the history of music and I am deeply proud of that. So to quote the Scottish poet Robbie Burns, “Here’s to us; who is as good as us? Damn few, and they’re all dead.” Thank you my friends…35 and counting.”

For the September/October dates with Slayer, Anthrax is making available a limited number of “VIP Kings Ensemble Packages.” In addition to the band’s new For All Kings CD, access to the band’s Meet’n’Greet, a personal photo with the band, early entry into the venue, and much more, these special packages will include the buyer’s choice of a Scott Ian Signature Guitar, Charlie Benante Signature Series Snare, or a Frank Bello Signature Series LTD Bass Guitar. Only 10 of these Ensemble Packages will be available. For more info on all of the Anthrax VIP Packages, go to http://anthrax.com/vip-info/

Confirmed dates for Anthrax’s 35th anniversary tour are as follows:

ABOUT ANTHRAX:
This year, Anthrax celebrates its 35th anniversary as a band with the release of one of the year’s most-anticipated metal/thrash albums, For All Kings, (February 26, Megaforce in North America/Nuclear Blast internationally). The eleven-song crusher that the band’s drummer Charlie Benante has described as “aggressive and super-thrashy,” was written by Benante, bassist Frank Bello and rhythm guitarist Scott Ian, the dynamic triumvirate whose unique composition chemistry is, in part, what sets Anthrax’s music apart from other bands’ in the same genre. Add to that Joey Belladonna’s breathtaking vocals and the searing guitar leads by newest member Jonathan Donais, and it’s no wonder the band has been so excited about its 11th studio album.

For All Kings debuted at #9 on Billboard’s Top 200, becoming Anthrax’s highest-charting album in more than two decades. A first-quarter U.S. tour with Lamb of God consistently resulted in some of the exceptional live reviews Anthrax has received in its career.

Over its 35-year career, Anthrax has been a pioneering band with its unique style, sound and heavy brand of thrash metal, and, as Metallica’s Kirk Hammett put it, “one can hear their influence on any number of up and coming bands.” The band has sold in excess of 10-million units, received multiple Gold and Platinum certifications, six Grammy nominations and a host of other accolades from the media, industry and fans. From the race and genre barriers Anthrax helped break down in 1988 when they collaborated with Public Enemy on “Bring The Noise,” to becoming a card-carrying member of The Big Four – with Metallica, Slayer and Megadeth – as one of the four bands that defined the speed/thrash metal genre, to being the first metal band to have its music heard on Mars when NASA played “Got The Time” to wake up the Mars Rover, Anthrax continues to demonstrate it’s just all about the music.