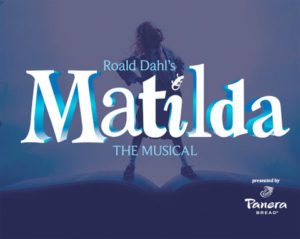 As an owner of a satellite radio one of my guilty pleasures is the “On Broadway” channel. Lots of show tunes, both old and new. One of the shows whose score I’d heard, but hadn’t seen, was the story of the girl who likes to read, “Matilda.” I was happy to learn that it would be kicking off the season this year at Starlight. That being said, I wasn’t as happy when I left the theater.

Based on the classic children’s book by Roald Dahl, “Matilda” tells the story of a young girl born to uninterested parents. Her mother (Darcy Stewart) is upset that her labor has interrupted her goal of dancing in an upcoming contest. Dad (Brandon McGibbon) is a car salesman who is so upset at having a girl he continuously refers to Matilda (a very good Lily Brooks O’Bryant) as a boy. “I’m a girl,” the young lady repeatedly reminds him. They send her off to school, but, as a young child, she is put in the worse class where all she gets for her love of reading is lectures by the school mistress, Miss Trunchbull (David Abelles). Hilarity ensues.

OK, first the good part. The songs are catchy and the young cast members are in good voice and have nailed the choreography. The bad part, especially with the parents, is that their British accents seem forced. And that’s being polite. It’s almost as if they had attended the “Dick Van Dyke School of Accents.” When he played Bert in the film “Mary Poppins,” Van Dyke’s accent was so atrocious – and yes, I know that word rhymes with supercalifragilisticexpialidocious – the book’s author, P.L. Travers – refused to let Walt Disney make a sequel.

If you like watching talented children then go see “Matilda.” If not, read the book.