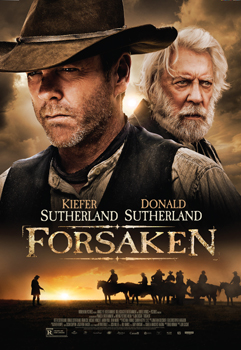 Here’s a little trivia for you. Donald Sutherland and his son, Keifer, have appeared in two films together. One is A TIME TO KILL though they did not share a scene together. The other is MAX DUGAN RETURNS, which came out in 1983. The bad news is that it took the father/son duo more than three decades to team up on the big screen again. The good news is a new film called FORSAKEN.

“Your mother’s dead.” These are the first words that Reverend Clayton (Donald Sutherland) speaks to his son, John Henry (Keifer Sutherland) as he returns home after a 10-year absence. John Henry left home to fight in the Civil War but wound up a notorious gunslinger. He has come home to reconcile with his father, and the townspeople, who view the “new” John Henry warily. He has also come home to find that one of the town’s leaders, James McCurdy (Brian Cox) is using force to make people “want” to sell their farms and leave town. Those who don’t sell soon find themselves dead. McCurdy has hired notorious gunfighter Dave Turner (a very subtle Michael Wincott) to oversee the townsfolk and their migration. One of Turner’s men, Will Pickard (Landon Liboiron, in creep mode) enjoys violence and goes out of his way to belittle John Henry, who no longer wears a gun. That is, of course, until he has to.

FORSAKEN borrows from some of the best westerns of the past 30 years, including SILVERADO, UNFORGIVEN and HBO’s “Deadwood.” Both Sutherlands are in fine form and it is a genuine treat to see them together on screen. Their scenes together, especially those strictly devoted to being loving father and estranged son, are brilliant. A lot of people think of Brian Cox as a smooth character actor, but they never remember that he was the original Hannibal Lecter in the film MANHUNTER. While not as creepy here, his performance is strong and commanding. Wincott is also smooth and southern, obviously embracing the role of gunslinger as much as John Henry is trying to distance himself. As the woman he left behind, now married, Demi Moore makes a rare appearance and is also solid. Production values are well done and director Cassar, one of the driving forces behind television’s “24,” keeps the story moving smoothly. If you’re a fan of the genre’ you won’t be disappointed by FORSAKEN.