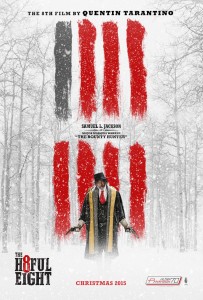 One thing (of many) that I love about Quentin Tarantino is that he knows the history of film. Not only the films themselves but how they were presented. For “The Hateful Eight” he has harkened back to the old days of “Road Shows,” when films would open in only a few cities in the country, before opening wide later. These presentations were events, featuring reserved seats and program guides, and when they began patrons would pay a quarter to see them when the normal price to see a film was a dime. “Gone With The Wind,” “Oklahoma,” “Ben Hur,” “The Alamo,” “The Sound of Music” and “Patton” were some of the films that opened this way. Now, four decades since the last “roadshow” film (“The Man of La Mancha”), the big event is back with “The Hateful Eight.”

A stagecoach makes its way through the snow, containing John Ruth (Russell) and fellow passenger Daisy Domergue (Leigh). As their driver, O.B. (James Parks, son of longtime Tarantino ensemble member Michael) tries to beat the blizzard closing in on them they are flagged down by a mysterious man on the side of the road who asks, “got room for one more?” Ruth is skeptical. His nickname is “the Hangman” and Daisy is his prisoner. Soon John Ruth, Daisy Domergue and the mystery man find themselves stranded at a stagecoach stop called Minnie’s Haberdashery along with five other people. These are the hateful eight!

If anyone can hold your attention for three hours with a film whose story takes place in one room it’s Tarantino. His way with dialogue has no equal. Neither do the performances of his cast. Russell, whose mustache and facial hair have him resembling Yosemite Sam, is gruff and no-nonsense. The mystery man, Major Marquis Warren (Jackson) is also a bounty hunter, though he claims to have no knowledge of the healthy reward being offered for Daisy. They also make the acquaintance of Chris Mannix (Walton Goggins), who claims to be the new sheriff in town. Waiting for them inside are Bob “the Mexican” (Demian Bichar), Oswaldo Mobrey (Tim Roth), Joe Gage (Michael Madsen) and former (the wrong side) Civil War General Sandford Smithers (Bruce Dern). Each has a story, as well as a story to tell, and it is here that we meet and begin to understand who is who.

If you paid attention to the running time you’ll see that the film runs in excess of three hours. This includes the Overture (a title card flashed on screen while the musical score plays) and an Intermission, which is just exactly what it sounds like. This divides the story and, more importantly, the film. Where the first half seems a little forced, the second half is pure Tarantino gold. Back in January 2014, the script to “The Hateful Eight” was leaked to the public, so angering Tarantino that he vowed to never make the film. Eventually cooler heads prevailed but the first half of the film seems almost unfinished, as if the draft of the script Tarantino used wasn’t completed fully. Both halves are propelled by another excellent group of ensemble actors. Russell, who never seems to blink, is cold and no-nonsense. Leigh is filthy and disgusting. Jackson is smooth and cool. Goggins is braggadocio. And the four who are there to greet them? Quiet and calculating. Of course, this is Tarantino, so nothing is ever exactly as it seems.

Technically the film is almost perfect. The opening sequences in the snow covered mountains are breathtaking. The film is slated to play in 70 mm in selected cities starting this Friday, and I can only imagine how it will look in that format. That being said, the majority of the film takes place indoors so I’m not sure how much of a difference the 70 mm format will make. The film is almost over-the-top bloody and, like “Django Unchained” before it, there are multiple uses of the “N” word, so be prepared for an adult evening out. And an entertaining one.