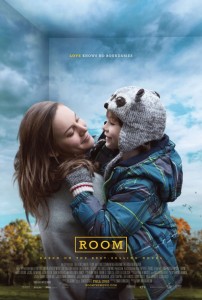 I can’t remember where I heard it, but I recall someone having a conversation and the subject of someone that lived in a remote village came up. The person appeared happy living his very simple life and the one converser commented that this guy’s life must be horrible, because he didn’t have any of the modern conveniences. The other replied that the fact he wasn’t aware of what he was missing is why he was so content. I’m paraphrasing here, of course, but in a nut-shell, this is the story of “Room.”

We meet Ma (Larson) and 5-year old Jack (an amazing Tremblay) as they get ready for the day. Ma makes breakfast while Jack watches television. As we watch them go about their day we notice that the scenery never changes. We later hear the fumbling of locks and an unseen male voice. This goes on for what seems like an eternity. Eventually we learn that many years ago Ma was kidnapped. She has been living in “room” for the past seven years, with only a small skylight in which to watch the time go by. But she has been planning. Planning for the day when she and Jack will be free. But when will that day come?

Emotionally exhausting, “Room” is a film that you will continue to think of long after you’ve left the theatre. Based on the best-selling book by Emma Donoghue, who also wrote the screenplay, the film is an acting tour-de-force for both Larson and young Mr. Tremblay, who should certainly be on the Oscar short list for their performances. Though the story sounds as if it was based on the tragic events that occurred in Cleveland it was actually inspired by the Fritzl case in Austria. No matter where the idea came from, the story is harrowing. Director Abrahamson makes it even more tragic by making the audience feel the claustrophobia. This continues throughout the film, even when circumstances change. To Jack, “room” is, at times, comforting. To me, “Room” is an emotional roller coaster that I’m still riding!