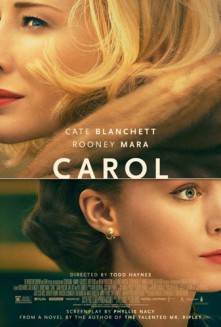 At the outset of Todd Haynes’s latest film Carol, two women meet up in a restaurant in 1950s New York City before they are interrupted by a good natured young man. He ultimately escorts the stylish younger lady off to a party and then we drift back in time. It’s a simple start to a beautifully crafted romantic drama which spends the rest of its runtime loading up this and many other minute interactions with infinite complexity. Working from Phyllis Nagy’s adaptation of Patricia Highsmith’s groundbreaking novel The Price of Salt, director Haynes (of 2002’s lauded Far From Heaven) once again showcases the 1950s as the backdrop for simmering social tensions and stellar work by his lead actresses.

As with everything in Haynes’s gorgeous film, the beginning of Carol and Therese’s relationship is sold in loaded small talk. Carol Aird (Blanchett), looking every bit the glamorous fifties socialite, inquires after Christmas gift suggestions from shopgirl Therese (Mara, saddled with a management-enforced goofy Santa hat). Carol eventually settles on a train set, providing Therese with all her relevant contact info to ship her order. She then sashays away with a compliment to the Santa hat. To the outside shopper, this was just a cordial transaction between two ladies but the dialogue sold through Mara and Blanchett’s eyes screams of a mutual attraction. Not to mention the lingering shots of Carol’s perfectly manicured hands that hint at a world struggling photographer Therese can only aspire to be part of. Conveniently Carol forgets a pair of gloves at Therese’s counter, offering Therese an excuse with which to follow up with this intriguing customer. Under the guise of gratitude, Carol is enabled to take Therese to lunch and from there they’re off and running. Or rather roadtripping.

one another because Haynes’s film is so much about these women in transitions. It’s unclear what exactly Carol sees in Therese at first except that Carol knows where her desires lie at this point in her life (a past girlfriend in the form of Sarah Paulson’s Abby remains Carol’s strongest bond besides her young daughter) and she will soon be officially divorced from her husband. Her world’s seemingly coming apart and she’s trying to grasp onto something new. Meanwhile Mara is simply heartbreaking as the younger Therese. Navigating this time period, Therese doesn’t even know how to articulate what she wants from Carol or why. A stunning Mara, who won Best Actress with this film at this year’s Cannes festival, is magnetic as her quiet turmoil eventually spills over into a teary outburst before Therese can reform into something stronger.

The leading ladies are capably supported by their would-be male counterparts who are at a loss as to what to do with these women. Kyle Chandler as Harge, Carol’s ex-husband-to-be, launches an attack of sorts on Carol’s ‘morality’ with his legal team in a move that smacks more of desperation than maliciousness. Meanwhile, Therese fends off the over eager advances of Richard (Jake Lacy) and her peers with indifference. To add to it all, Haynes is in his element with period production design along with costume designer Sandy Powell (coming off this year’s triumphant work on Cinderella) and the result is an all around marvelous drama to behold.

Carol was screened as a part of the 2015 New York Film Fest.
I got the chance to speak to Blanchett at Carol’s NY Press Conference, which you can read here.