The works of author Patricia Highsmith have been crafted into some truly great films including Alfred Hitchcock’s Strangers on a Train and Anthony Minghella’s The Talented Mr. Ripley. This weekend, Todd Haynes’s latest film Carol from Highsmith’s The Price of Salt adds to these successes with brilliant work from a cast lead by two-time Oscar-winner Cate Blanchett and Oscar-nominee Rooney Mara. Blanchett plays the Carol Aird, a wealthy soon-to-be-divorced socialite in 1950s New York who begins a complex relationship with Mara’s younger shop girl Therese. The two navigate their feelings for one another while being challenged by the social norms of that time period. I attended Carol’s New York press conference this week where they, along with screenwriter Phyllis Nagy and fellow castmates Kyle Chandler and Jake Lacy joined moderator and WOR Radio film critic, Joe Neumier to discuss the film.

Director Haynes began the conference by discussing his approach to Highsmith’s work and this powerful romance at the center of the film:

Todd Haynes: I really was taking it on, as if for the first time, looking at the love story. Something that I felt I hadn’t really ever accomplished directly in my other films. And that really began with reading The Price of Salt, Patricia Highsmith’s beautiful novel, and the gorgeous adaptation of Phyllis’s script that first came to me with Cate attached. So it was quite a bundle of incentives when it first landed with me in 2013. But love stories are, you know unlike I guess war which is about conquerring the object, love stories are about conquerring the subject. And so it’s always the subject who is in a state of vulnerability and peril at some level. And through much of Carol that is the character of Therese who occupies a much less powerful position in the world in Carol…is younger, is more open, is sort of experiencing this woman with a freshness that is different from Carol’s life and experience. But what I loved about this story was how what happens between the two women really moves them through a series of events which change them both. And ultimately by the end of the film, it’s shifted sides. Carol is the one who comes to Therese with her heart on her sleeve at the end of film. So all of that made a lot of the smaller elements of looking and who’s being looked at and who is doing the looking and all of those questions, something that was very conducive to the cinematic language.

I asked Cate Blanchett, who had a supporting role in The Talented Mr Ripley in 1999 if she had studied Highsmith’s work in preparation for that film and how her perception of Carol changed upon revisiting it for this role:

Cate Blanchett: Yeah it’s one thing entirely reading a novel and quite another when you’re then reading it again when you’re going to play a character in the book. I mean I read everything of hers I could at the time we were making Ripley. It was actually, much to shame, the first time I’d ever encountered her work. But I also was very interested in you know all of the sort of filmic incarnations of her work as well…And there’s some wonderful observations and parts of internal monologue–well more internal monologue that Therese has–but observations of Carol that’re in the novel that were really really useful to read. I just read at the time, the first time I read the book as a reader but to then to try and make that stuff manifest was really exciting.

Screenwriter Phyllis Nagy actually got to speak extensively with Highsmith before she passed away in 1995. Moderator Neumier followed up with Nagy as to whether Highsmith was nervous about this novel becoming a screenplay for film:

Phyllis Nagy: Well she was dead by the time this came to me. So we didn’t have that conversation…[laughs] I’ll have it with her later tonight. She didn’t like many of the film adaptations of her work.
Cate Blanchett: Didn’t she?!
Phyllis Nagy: Oh no, she couldn’t stand them. Especially Strangers on a Train.
Cate Blanchett: Oh what does she know!?
Phyllis Nagy: You know from her perspective–the guys trade murders in that book and in the film of course they don’t and it was one of the first arguments we had when I said ‘Oh, I love Strangers on a Train!’ she said [frowning] ‘Hmmm’ really with disgust. But she liked aspects of the films, Robert Walker she loved and she thought Alain Delon was extremely attractive, of course. So I hope that she would find this entire enterprise extremely attractive. I think she would. I think we are all of us not betraying the intent and the tone of the work. Which, really I think is the only thing you can do to be reverent to a source material. Everything else is up for grabs.

Rooney Mara: I think one of great things about the film is that it’s not a political film, it’s not a film with an agenda, it’s not preaching to the audience. So people are allowed to just watch it for what it is which is a love story between two humans.

Later, she addressed whether or not Therese having an older female lover lessened the chances audiences would see the age gap as something Carol was exploiting.

Rooney Mara: …Would it ever feel predatory? It’s not like I’m 17 years old. You know, Therese is younger than Carol and she certainly is–they’re at different stages in their lives but I don’t think that she’s so young that it would be…it never felt predatory to me and I don’t think it ever really would have, male or female.

Rooney’s character at the start of Carol is already in a relationship with an over-eager boyfriend Richard, played by Jake Lacy who spoke about Richard:

Jake Lacy: Todd spoke a little when we first met about the idea that, for Richard the world is there to take, you know. He’s young, he’s in New York, he’s first generation American. He’s smart, he’s handsome, he has a job and a girl. You know, the world is his for the taking and yet it slips away from him. And sort of without knowing it, thank god that it does because otherwise…he’s fifteen years or ten years earlier than Carol and Harge and that world if he and Therese stayed together and created a life like them. It wasn’t a life anymore, you know?…To me, for Richard the idea of a dream that then falls apart, or that someone is not willing to be a part of that dream and trying to wrangle them into it… 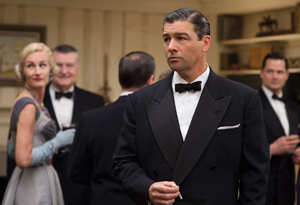 Kyle Chandler plays Harge, Carol’s husband who is grappling with losing his perfect family in his divorce from Carol. Chandler spoke about the importance of playing his character without making him stereotypical:

Kyle Chandler: …It allowed me, I think at some point I realized that it could be a stereotypical character very easily. And [to] portray what you would imagine Guy from the Fifties under these circumstances…but what happened was at some point, the worst possible moment in a man’s life or a woman, when they’re in love, and they realize they’re not in love anymore. And this character never realized he wasn’t in love anymore. He was always in love and he was intensely in love. And he also had this little child. Not just his wife, not just his child, but his family unit. So important to him, and so important to say nothing of his social status and what he was. But he refused to give that up. So that…allowed me I think, to stay within that and never lose love or respect; But still be very confused on what is going on. Which goes back to that one direction that [Haynes] gave me when [Sarah Paulson’s character, Carol’s ex-lover Abby] is walking in the room and I look across and I go, ‘Who ARE you?’ basically.

Paulson as Abby, Carol’s ex-lover, is one of Carol’s strongest bonds in the film, who she actually calls upon to pick up Therese when they hit some obstacles. Paulson spoke about her character being in this tricky situation.

Sarah Paulson: …I do think, I wonder what I personally would do if someone I loved and still had feelings for, if I was called upon to come in and rescue the person that she currently loves…I don’t know, I don’t know. It was to me a very big testament to her friendship and her love and I think the desire to be around Carol and in Carol’s orbit no matter what. I think that Abby’s sense of society–and I don’t mean literal society but her community, her friendships, you know they were probably quite narrow at that time. So to lose something like that would be…the consequences of that would be too enormous. I just started thinking about things like that…

Haynes also commented on how a modern audience views all of Carol’s female relationships versus how people within that time period in the film would have seen it:

Todd Haynes: There are also things that a modern audience has to keep reminding ourselves we’re quite different at this time, counterintuitively. Where an older woman could invite a younger woman to lunch and it was absolutely totally appropriate. Where she would have never invited the head of the ski department to lunch. Or they could check into a motel together as two women but if they were a heterosexual unmarried couple, checking into a hotel at this time would have been a scandal. So there’s ways in which the morays and the codes of the time are also things that we’re learning and reading against their actions and gestures.

Carol is now in theaters, you can read my 5-star review here.