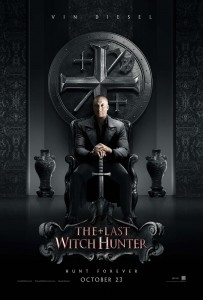 Let me say right at the start that I am a big Vin Diesel fan. While the majority of his movies are not the greatest, there is something about him as a personality that makes you want to root for him. Here we find him making the rounds as an immortal witch hunter, protected and watched over by a certain faction of priests. Kaulder (Diesel) is officially known as a witch hunter, brokering the peace between bad witches and good humans. But when the peace is threatened, only Kaulder (and his partners in peace) can save the day.

The movie starts out in olden times, where a band of warriors, led by Kaulder decides to take out a coven of witches. Kaulder does the job but is cursed with eternal life by the witch queen he has just dispatched. Which takes us to modern times. Kaulder lives in a beautiful high rise apartment which is lavishly furnished. He also drives a flashy car. Good thing he’s keeping a low profile. He is about to watch the 36th priest who has protected him (Caine) retire and meet number 37 (Wood). It all unravels when #36 is found dead, which can only mean one thing…WITCHES! If only we knew someone that hunted them.

I’m tempted to say this movie blows and leave it at that but, dammit, I can’t. First off, it’s made by Summit, which gave us the “Twilight” series of films (sadly, the special effects utilized by the studio are still achingly bad). Second, the cast does try hard. And third…Vin Diesel and his screen presence. He’s not doing Shakespeare here, which is a good thing. Early in the film he must discuss the “ancient rooooons” he has been looking for. Things get better when Wood shares the screen, his wide-eyed young padawan getting serious while looking like a psychotic Chris Kattan. The special effects are poorly designed and the laughs are readily found, though probably not intentionally.

My advice: see it for Vin Diesel. If you need to, just pretend he’s driving around in a fast car! I’ve never seen the “First” Witch Hunter. Unfortunately, I did see the “Last” one!

One Reply to “Film Review “The Last Witch Hunter””