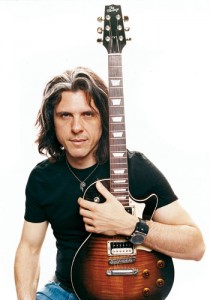 Alex Skolnick is probably best known as the guitarist for the legendary thrash metal band Testament. When not performing with the group Alex keeps busy with numerous side projects such as The Alex Skolnick Trio and, his latest endeavor Metal Allegiance, The group which features a laundry list of some of today’s top heavy metal performers is set to release their debut self titled album on September 18th and Media Mikes had the chance to speak with Alex recently about the album and the group’s formation.

Adam Lawton: How did you first get involved with the Metal Allegiance project?
Alex Skolnick: It all happened pretty fast. I was on the “MotorBoat Cruise” playing with Testament and that’s where the very first performance under that name happened there. There were a bunch of us guys hanging out during dinner one night and some of the guys were talking about set lists. They wanted to add in some classic Van Halen and I was the guy who was pretty up on that stuff. I wasn’t really planning on playing and Mike Portnoy sort of threw it out there as a joke and I went along with it and everyone went nuts. We ended up having this great jam and afterwards we were talking about more shows in the future and I said I would be for it any time. I get a call one day asking if I would be interested in doing an album. I had never worked with any of these guys before but I was willing to give it a shot. I went in thinking it was going to be mostly an album of covers with possibly two or three original songs. Up until this point all we had played together was covers. When we got together the writing process just took off. We started off with just a couple songs we felt great about and it just sky rocket from that point on.

AL: Being that you all had never worked together before what was the creative process like for the group?
AS: We all are fans of this music and we wanted to make an album that we would be excited about putting out. We all had ideas as to what makes great album and we wanted to make sure that we captured the performance of each player involved with the record. There’s a lot of great stuff being recorded these days digitally but we wanted to take a more analog approach and incorporate elements from areas that inspired us to become musicians.

AL: Was a majority of this album created separately and sent back and forth via email or was there a point where everyone got together and recorded as a group?
AS: We worked in a couple different phases. The first phase involved the three core guys of the project. Myself, Dave Ellefson and Mike Portnoy were brought together by our mutual friend Mark Menghi. The four of us got together during the holidays and did our first session. A few weeks later we got together again for a second session. Those sessions were all done in a traditional band type recording session. In February we went out and did the “ShipRocked” Cruise and after getting back we began the next phase of work which we did in Long Island at Mike Portnoy’s home studio. There was some stuff that got sent back and forth via email but a majority of the album was done the classic way with everyone being present in the same recording space.

AL: When it came time to bring in the various guests who appear on the album who was the person making those decisions?
AS: The four of us myself, Dave, Mike and Mark made all of those decisions together. We call ourselves “The Core Four”. There was a constant stream of text messaging that we all would reply to where we all made suggestions related to the music. We decided that we would all have to agree as to who was going to be asked to be a part of the project. There were some ideas that didn’t end up happening as ultimately we felt they just wouldn’t fit and some of those may have helped sell more records but this wasn’t about that. Everything was about the feel of the track and how each piece fit and worked 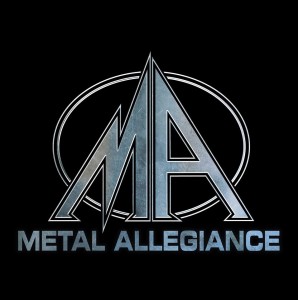 AL: With the project taking on almost a life of its own is this something you guys hope to continue to expand on or, is this album the closing piece for the group?
AS: I believe we would like to keep this going indefinitely. There is no reason not to. We don’t want to be limited to just performing on cruise ships or at large events. We do have plans to do those types of events but we also want to do more. We have the album release show in New York at the Best Buy Theater which is going to feature most of the personnel from the album. That’s something that is going to be hard to duplicate on a tour but we are figuring things out as we go. We just announced our first international show in Mexico City which will feature the core group along with Mark Osegueda from Death Angel on vocals. There are a number of different levels that this project can work on which I think is going to be really great.

AL: Outside of the Metal Allegiance project what else are you currently working on?
AS: I have a lot of stuff going on. I have my first acoustic album out which is called “Planetary Coalition”. This is a world album and is something that I always wanted to make. I have a bunch of great artists featured on there including Rodrigo y Gabriela. Last year the trio recorded a live concert and it came out really well. We also recently wrote a few new songs and I think we are going to release that as a live album. I’m going to be a part of the “Axes and Anchors” cruise which is a cruise for guitar enthusiasts. Zakk Wylde is going to be there along with Yngwie Malmsteen, Michael Schenker and a bunch of other great players as well. Testament has mostly one off shows booked as of right now and in between those we are writing new material with hopes of having a new album out next year.