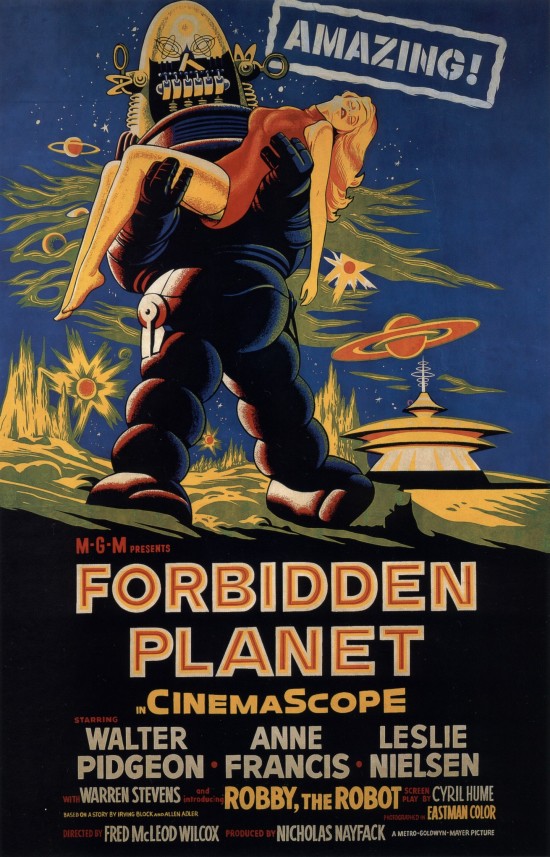 “Forbidden Planet,” the classic 1956 science-fiction classic, will be the 37th film to be presented by film historian Bruce Crawford at the upcoming Tribute to Classic Films, to be held on Friday, October 23, 2015 in Omaha, Nebraska. The screening will begin at 7:00 p.m.

The film, starring Walter Pidgeon, Leslie Nielsen, Anne Francis and the timeless Robby the Robot, is considered one of the best science-fiction films ever made and was a strong inspiration on such future projects as “Star Trek.” The screening will be held at the Joslyn Art Museum, 2200 Dodge Street in Omaha.

The evening’s special guest will be actor/author/producer Robert Dix, who played Crewman Grey in the film. Mr. Dix is the son of legendary silent film star Richard Dix, whose Westerns were among the most popular films of the time.

As with other Classic Film Tributes, artist Nicolosi will design a commemorative United States Postal Envelope honoring the film, with the original artwork being unveiled prior to the screening. You can purchase tickets for the event, which benefits the Nebraska Kidney Association, by visiting the customer service counters of all Omaha-area HyVee food stores. The cost is $24.00. For more information you can call (402) 932-7200 or visit www.omahafilmevent.com