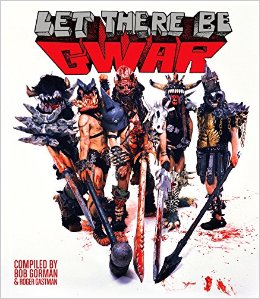 “Let There Be GWAR” gives fans around the world the most comprehensive guide to the greatest band ever created. From their early start in the bowels of a dilapidated Dairy factory in Richmond, Virginia to their spread across the land like a disease through the 1990’s and 2000’s. “Let There be Gwar” is a record and testament to all that is GWAR as it takes you through their kingdom via photos, band posters and interviews along with chronicling their albums, comics and video all in one nicely blood stained hardbound book.

Scumdogs around the universe can now rejoice as for the first time ever the history of all things GWAR can be found in one place. Over 350 pages of rare photos, interviews and art make up this hard cover book which I found do be just an amazing piece. “Let There be Gwar” acts almost like a time machine in that it gives you that fly on the wall perspective during some of the band earliest moments and then as it progresses you are given a front row seat during the bands rise to total domination. Photos of characters like Sleazy P. Martini, Sexecutioner and Slymenstra Hymen along with the master himself Oderus Urungus and his other cohorts both current and from years past adorn the glossy pages amidst interview clippings and a random spew stain here and there.

If you’re a GWAR fan this book obviously is for you as everything from the bands early years referred to by members as the “Dim time” to the more recent incarnation of the band and the inception of the yearly slaughter fest known as the “Gwarbbq” you get it all! Though the books $50 price tag might discourage lesser fans from picking this book up I assure you that those willing to part with their cash will not be disappointed with this really great looking book.