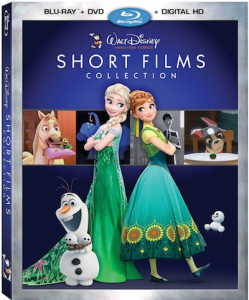 We all know that everyone buying this Blu-ray would be mostly for “Frozen Fever”, one of Disney’s biggest hits ever. Honestly, it is an amazing short and we have easily watched it ten times already. The new song is easily one of the best song Disney has ever created. Other than “Frozen Fever”, this Blu-ray contains two never before released on video shorts including “Tick Tock Tale”, and “Lorenzo”. “Paperman” is one of my favorite shorts…probably ever, same goes for “Tangled Ever After”, which is full of laughs and “Feast”, which definitely gets a smile on your face. I can easily watch this shorts over and over.

Official Premise: From Walt Disney Animation Studios comes an extraordinary new collection of award-winning and beloved short films featuring Disney’s Frozen Fever, starring Anna, Elsa, Olaf, Sven and Kristoff, and the Oscar®-nominated Lorenzo (Best Animated Short, 2004). The Short Films Collection includes contemporary shorts starring classic characters, such as the groundbreaking 2013 Mickey Mouse cartoon, Get A Horse! And the holiday treat Prep & Landing: Operation: Secret Santa, as well as celebrated Oscar winners Paperman (2012) and Feast (2014). Enjoy them together for the first time in this must-own collection with all-new extras including an inside look at the Disney Animation shorts, featuring introductions and interviews with the acclaimed filmmakers themselves.

Disney delivered a great release with a combo pack including a Blu-ray + DVD and digital HD copy. The 1080p transfer is flawless as expected from Disney. The DTS-HD Master Audio 7.1 track is also amazing especially with Paperman’s score and Frozen Fever’s song. There are a few bonus features for nothing great. There are intros from the filmmakers before each short but they are like 30 seconds each and don’t give much info at all. There is also an interview with “Big Hero 6” star T.J. Miller. Lastly there is a final short film, “Runaway Brain” starring Mickey Mouse…but it is only available online using the Disney Movies Anywhere app or website.