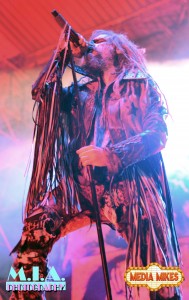 The macabre entity known as Rob Zombie brought his band of merry maniacs to the Tag’s Summer Stage on June 19th as part of his “Super Monster Sex Action Tour” where he performed for a near capacity crowd. Though the front man pointed out that he was a little under the weather you would have never noticed as he and his band blasted through 17 songs which spanned not only Zombie’s solo albums but also some of his work with his previous band White Zombie. Though foreboding skies seem to loom over the head Mother Nature played nice providing a great experience for concert goers.
Flanked by longtime band members Piggy D and guitarist John 5, and basked in glowing red lights amidst a smoke filled stage the man himself Mr. Rob Zombie appeared before the anxious crowd for what would be his first ever appearance at the Tag’s Summer Stage. Not one to disappoint or waste time Zombie and company blasted through songs like “Superbeast” and “Living Dead Girl” which gave way to such classics as “More Human Than Human”, “Meet the Creeper” and the always present “Thunder Kiss ‘65”. In what appeared to be a 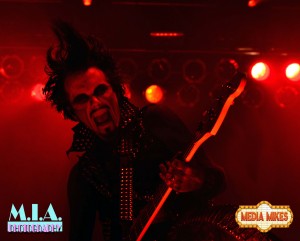 much more scaled down stage show compared to previous tours the band which was rounded out by former Marilyn Manson drummer Ginger Fish on drums proved that they could perform equally, if not better without the various stage props and gimmicks. The band had a great mix of sound coming through the PA which captured each instruments sonic element pairing nicely with the shows red/blue/green visual elements.

Having seen Rob and his band in a number of different incarnations and venues dating back to some of his early solo performances a lot has changed however one thing seems to always remain a constant. Each time Rob Zombie takes the stage he does not disappoint and this night’s show was no different. A great sound and performance along with the perfect mixture of both new and old material making up the set list made for an enjoyable night of rock and roll.