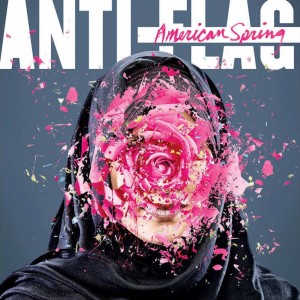 The Pittsburgh, PA based punk rock band Anti-Flag recently released a brand new album (their 10th all together) chocked full of politically fueled anthems titled “American Spring”. The album features 14 brand new tracks along with guest appearances by Tom Morello and Tim Armstrong. Media Mikes had the chance to speak with Chris No.2 recently to discuss the new release, the groups tour plans and the idea behind the groups strong political approach.

Adam Lawton: What can you tell us about the new album “American Spring”?
Chris No. 2: “American Spring” is our 10th record and our first after the 20th anniversary of the band. I think we worked harder on this latest record than any other Anti-Flag record. It’s a
tremendously personal record for us. We focused on using empathy as the key to
live above racism, sexism, homophobia and corporate waged war in 2015.

AL: Can you tell us about the guest’s performances on the album and how
those came about?
C#2: Our very old friend / former record producer Tom Morello is on the track “Without End”. He put down this epic space vide solo which is really great. Tim Armstrong from Rancid sings verse 2 of the song “Brandenburg Gate”. Both of those guys being a part of the album is the result of having some very talented friends who we both admire for their talents and humility. We called them and asked if they, as important people in our lives, would appear on an important album for us and thankfully they both said yes.

AL: Some bands tend to shy away from various topics such as politics however you have always been very vocal towards it. What is it about these topics that inspires you to write your songs around them?
C#2: It’s our only inspiration. We want people to know they’re not alone. There are a lot of us concerned with more than just ourselves. These songs are for those people.

AL: Are you ever worried that the subject matter of your songs may turn away listeners who maybe are as in touch with the current political climate?
C#2: Nope. There are plenty of bands out there for people to listen to if these songs don’t happen to be for them.

AL: You guys just wrapped up a run of shows in April. What are the bands plans going into the rest of the year?
C#2: Our goal is to play every city Anti-Flag has ever played as part of the touring for the “American Spring” album. We will be on the road indefinitely so we hope to be able to see everyone out there.